The research team and the central offices use the SAGE Suite electronic research administration system to manage the proposal lifecycle. The system is comprised of three components, that access the shared SAGE Suite database. 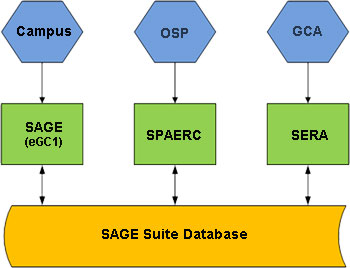 All research proposals submitted to sponsors external to the university go through the following process:

When a principal investigator (PI) at the UW decides to solicit funding for a research project from a sponsor, he or she identifies an appropriate funding opportunity and then, often with the assistance of a research administrator, puts together a research proposal according to the sponsor’s instructions. From the proposal information, the PI and/or research administrator create an online application—called an “eGC1”—in SAGE. The application provides the means to route the proposal information around campus and to OSP for approval, before OSP submits the proposal to the sponsor.

When the research team first creates the application, it has a status of Composing. Once the application has all but the final version of the scope of work for the sponsor, the preparer routes it to reviewers. The status of the application changes to Routing and it moves into the campus approval phase.

Preparers have the option to “withdraw” the application from routing to make adjustments, which changes its status to Withdrawn, and then re-complete it so that it resumes routing, resetting its status to Routing.

Tip: The name “eGC1” comes from the original paper form which was the GC-1 (Grant and Contracts form 1). The “e” indicates the electronic version of this form.

Each school or college at the UW defines its own approval “routing rules” to use with SAGE approvals. The rules indicate which unit levels (division, department, dean, etc.) will need to review an application based on:

When the research team routes the application for the first time, SAGE sends an automatic email notification to the first reviewer(s). This is usually just the PI. If the PI is the person who completes the eGC1, then SAGE automatically marks it as approved by the PI. In that case, SAGE notifies the next set of reviewers. As each group of reviewers approves the eGC1, the system notifies the next group.

Note: Generally, each unit designates several reviewers, but only one reviewer needs to approve the application.

When a specific unit approves the application, information is added to the eGC1’s approval history, which can be viewed on the History & Comments page.

Approvers have the option to “return” the application to the preparers for any needed revisions. This changes the application’s status to Returned, and automatically sends an email to the PI, eGC1 Preparer, Administrative Contract, and Pre-Award Budget Contract, notifying them of the change in status. Once the revisions are made, the preparer would re-route the eGC1 to the remaining approvers.

Once all the required campus units have indicated their approval of an application, the application changes to a status of In OSP, indicating it is now ready for review by OSP.

OSP staff review the application and proposal documents to verify compliance with research regulations and the sponsor’s requirements. If OSP determines that the application needs some revisions, they will return it to the preparer. The preparer, PI and Contacts receive an email notifying them of the return, which contains the comments OSP staff must include as part of the return process. The comments can also be viewed from the History & Comments page of the eGC1 in SAGE.

When OSP determines that the application is ready, they submit it to the sponsor, and mark it as “approved.” The application status changes to Approved, and the application’s data at that point in time becomes a permanent record of the submission.

An application can be submitted to a sponsor in multiple ways. OSP staff usually submit all federal and electronic applications.

When a sponsor funds a proposal, OSP uses SPAERC to manage that information by creating a Funding Action (FA). When OSP sends the FA to Grant and Contract Accounting (GCA) for processing, the system automatically changes the application’s status from Approved to Awarded. GCA will process the FA and set up a budget for the research project in the financial system. The preparers will receive an email notification with the budget number information.

If the sponsor does not fund the proposal, OSP staff can change the status of the application to Denied by Sponsor.