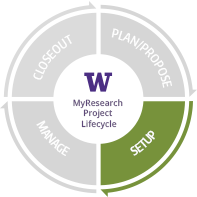 The Setup stage begins with receiving an award (congratulations!) or, if not externally funded, securing internal approval and resources. It involves preparing the project for launch, including confirming that all compliance requirements are met, and making final arrangements for resources and facilities, and for collaborations. In some cases, the various administrative and scientific/programmatic activities may progress from the Setup stage to the next stage (Manage) at different times.