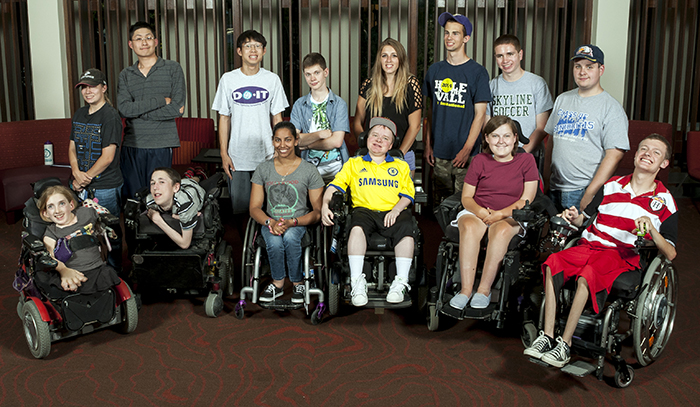 Eighteen Phase II Scholars began participating in DO‑IT in 2014. They attended their second Summer Study at the University of Washington (UW) in July 2015. During that second session, they continued to develop self-determination and self-advocacy skills and prepare for college and careers. They worked closely with professionals or university faculty in STEM fields such as neurobiology, digital arts, or robotics. Throughout the year, they communicate with each other, DO‑IT participants, and DO‑IT Mentors. They use laptops, assistive technology, and the Internet to support their academic studies, and they complete projects in exciting fields, including science, technology, engineering, and mathematics. Phase II Scholars communicate with each other at 2014do‑it@uw.edu; with all Scholars and Ambassadors at doitkids@uw.edu; and with the entire group of DO‑IT Scholars, Ambassadors, Pals, and Mentors at doitchat@uw.edu. After completing Summer Study 2015, these participants graduated to Phase III.

Hi, I’m Carl. I attend Woodinville High School, where I plan to join the debate team. I like music and playing the drums. I like gaming on my Xbox and computer. I have a dog. I am also a fan of the Chicago Blackhawks hockey team. My goal is to be a lawyer or work in business. I have taken an Advanced Placement test to receive college credit. I have Duchenne muscular dystrophy.

Hello, my name is Sean. My favorite classes are auto shop, math, and history. I have complete hearing loss in both ears and two cochlear implants. I enjoy hanging out with friends, watching TV, playing sports, and listening to music. I like hip-hop and rap, but I am open to other genres. I play football for my high school. I will attend Rochester Technology Institute in the fall.

My name is Jason, and I attend Mountlake Terrace High School. I am a member of the National Honor Society. I like to play baseball, basketball, and softball. I also run track and cross country, swim, and bowl. I enjoy playing video games and keeping score for the Mariners games. I would like to be either a Major League Baseball statistician or a technology engineer. I hope to attend either Arizona State, Oregon State, or the University of Washington. I have a visual impairment.

Hi, I’m Anita. I’m going to be a freshman at the University of Portland in fall 2015. I use a wheelchair because I suffered from polio when I was a baby living in India. I am interested in social work, psychology, and education. I am a rower, and I love doing community service, reading, hanging out with friends, and meeting new people.

Hello, my name is Aja. I go to Glacier Peak High School in Snohomish. I have minor cerebral palsy. My favorite subject is the Marine Corps Junior Reserve Officers’ Training Corps (ROTC). In the future I intend to cure cerebral palsy, so I can join the Army. I’ve been a member of the Future Farmers of America (FFA) and the National Honor Society. I enjoy archery and playing the piano. I am also an avid reader.

Hi, I’m Calleese. I attend iTech Preparatory, and I am in Running Start. I have a learning disability. I’m the vice president of the Local Association Student Council, which helps students from different schools and events to come together and learn from each other. I’m also a Key Club officer, and attended a weekend leadership camp. After I tore my ACL during a soccer game, I started learning photography. Now I’m a yearbook officer, head photographer, and editor. I attended DigiGirlz at Microsoft Portland and We Day Seattle, where we were inspired by other people’s stories and learned how to be better leaders. I am a very relaxed, outgoing person. I love playing sports, being outdoors, and adventuring. I have a grey bunny named Hopper who I adore. I’m also a twin!

Hi, my name is Jin, and I am hard of hearing. I attend Roosevelt High School in Seattle. I play percussion in symphonic band, marching band, and drumline. I enjoy reading, solving math problems, listening to music, playing basketball, and gaming. I would like to become either an architect or accountant. After graduating, I may attend the University of Washington or Washington State.

Hi, my name is Thor, and I attend Burlington-Edison High School. I am a WyldLife student leader and an active member of Young Life. I enjoy reading many genres of books, but my favorite is mythology. I enjoy hunting and fishing, and I am in a 4-H club. My career goal is to become a lawyer. I have a form of muscular dystrophy called Desmin myopathy.

Hi, My name is Kennedy. In June, I graduated from Woodrow Wilson High School in Tacoma. I placed as #8 out of 406 seniors. I will be attending Tacoma Community College in the fall. Some of my favorite subjects are art, English, and science. During my spare time I enjoy playing video games, watching movies, boating with my family, and listening to music. I listen to an array of rock music, from Led Zeppelin to Alice in Chains. I plan on attending a few good rock concerts this summer. My favorite movies are action and comedy. My career goal is to become a psychologist.

Hi! My name is Vanessa. I just graduated from South Whidbey Academy, where I was a member of the National Honor Society and participated in my school’s feminist/gender equality club. Taylor Swift is my favorite singer, but I also like James Taylor and movie soundtracks. I like to watch BBC TV shows like Doctor Who, Sherlock, and Downton Abbey. My favorite books are How to Save a Life by Sara Zarr, and Magic Hour by Kristin Hannah, but Harry Potter has a special place in my heart. I love to work with Photoshop and hope to one day be a graphic designer. In the fall I am planning to attend Skagit Valley College where I will pursue a degree in multimedia and interactive technology. I have Ollier disease.

Hello, my name is Alex. I graduated from the International School. I am the recipient of two presidential awards for academic excellence. I enjoy electronic gadgets and reading about how the latest technology improves people’s lives. I also like to draw objects and cartoon characters and aspire to be a well known artist someday. I am a huge theme park/roller coaster enthusiast. My long term goal is to become an engineer or an economic manager. I have a mild autism spectrum disorder. I will attend the University of Maryland in the fall.

Hi, my name is Lindsey. I attend Graham-Kapowsin High School. I like to read, write, draw, watch TV, and listen to music. I attend the Muscular Dystrophy Association Summer Camp every year, where we swim, fish, ride in motorcycle sidecars, and do many other activities. I have a retired service dog named Wonder and three younger siblings. When I graduate from college, I want to be an author and work with digital graphic art, preferably at DreamWorks Animation Studio. I have spinal muscular dystrophy Type 2/3, but it just adds a little more spice to my life, along with a wheelchair.

Hi my name is Teo. I graduated from Granite Falls High School, and I’m enlisted in the Washington National Guard. I like to hangout with my family and friends. I have always been involved in school activities like supporting my school sports teams. I’m a nice, funny, and friendly person. I will be attending Everett Community College in winter quarter 2016 and plan to major in the medical field. I have a learning disability.

My name is Matthew. I attend Mt. Spokane High School where I will be a senior. I am in Spanish club and National Honor Society, and I founded my school’s archery club. Additionally, I am one of the leaders of my school’s gamer’s club. I have a first degree black belt in Tae Kwon Do. I served on the student board for the Mobius Science Center and continue to volunteer at the museum. My favorite activities are fishing, snorkeling, archery, puzzles, and spending time at the beach looking for shells and treasures. I also love playing video games; some of my favorites are the Assassin’s Creed series, Minecraft, and Phoenix Wright Ace Attorney. I have a twin brother and a sister. My goal is to be an engineer.

Hi, I’m Mikaela. I graduated from Southridge High School, and I am currently attending Columbia Basin College. I like to tumble, stunt, and travel to places for fun! Pugs are my absolute favorite. In fact, I have one of my own named Sophie. In the future, I’d like to work in the medical field, hopefully in anesthesiology.

Hi, my name is Michael. I graduated from high school, but I’m not sure what my next step will be. I would like to work and move into an apartment. In my spare time I love to draw. I had cancer when I was one year old. I love animals, and my goal is to be a vet or vet tech.

My name is Eric, and I attend Skyline High School. I was named the “Most Inspirational Student” in 8th grade and am a member of the National Honor Society. I play on my school and club soccer teams. I also enjoy both playing and listening to music. I play drums and guitar. My family and I volunteer at the Issaquah Meals Program which provides food for people in need. I love to play with my dog, and I also help pet-sit for my neighbors when they go on vacation.

Hello, my name is Sangha, and I attend Bellevue High School where I play clarinet in symphonic band. I also play basketball every Saturday. I’m on cross country and track teams. For fun, I play video games. My favorite hobby is watching YouTube videos about new games. I’d like to be a computer engineer. I have an autism spectrum disorder.