In Memory of Brandon, Keaton, Mark, and Andrew

Mark was one of our '93 Scholars. In December 2001, Mark, who had been ill for some time, died peacefully in his sleep at his apartment in Spokane. In the early days of DO-IT, Mark developed a reputation for promoting philosophical conversations on the doitkids e-mail discussion list. He never found a controversial topic that he didn't like to discuss. He once actually admitted, "I enjoy being screamed at while making a rational argument."

Mark participated in Summer Study in 1993 (our first program!) and 1994 and was an Intern in 1995. We can still picture Mark racing across campus in his power chair with snacks stacked on his lap, while he was guiding (more like dragging) Randy (the co-coordinator of snack breaks and fellow Intern who is blind). Mark succeeded in reaching his goals of attending college and having his own apartment. He attended Big Bend Community College and Eastern Washington University for a total of 4 years. Last year he was busy developing plans for an Internet-based business.

Mark is missed by all of us who knew him as a DO-IT Scholar, DO-IT Ambassador, and friend. He helped make DO-IT what it is today. 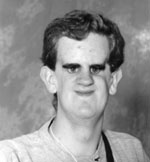 Keaton was one of our '97 Scholars. On December 26, 2001, Keaton died. He was from Alaska and attended the University of Utah. He planned to pursue a career in Engineering. About DO-IT, Keaton said, "I have found my membership in DO-IT to be empowering. The DO-IT experience helps liberate my mental functions from becoming stagnant or self-limiting. Thanks to DO-IT, I have assimilated the thought patterns, 'I can DO-IT' and 'I will DO-IT'. [Participating in DO-IT also] helps me synthesize strategies pertaining to how I am going to DO-IT. DO-IT ROCKS!"

Keaton is missed by all of us who had the good fortune of knowing him personally or benefiting from his participation in the DO-IT electronic community. We will forever be grateful for his contributions.

Andrew was one of our '95 DO-IT Scholars . . . bright, witty, upbeat, always ready for a new challenge. Some of us still remember his e-mail signature:

Andrew :) "Nobody said life would be easy. They only said it would be worth it!"

Andrew's parents wanted us to know that "DO-IT was one of the best things in Andrew's life." In an e-mail message to DO-IT participants they said, "We want to thank all of you for making this past year of Andrew's life so much more fulfilling, rewarding, and adventurous. He was so excited by the vision that the DO-IT program offered him. He was always talking about how he was going to go to college and get a degree in computer drafting and he was going to grab the tiger of life by the tail. He was going to set up his own business here at home and conduct his business via all the latest in communication technology. Unfortunately, his life energy ran a little short of his ambitions."