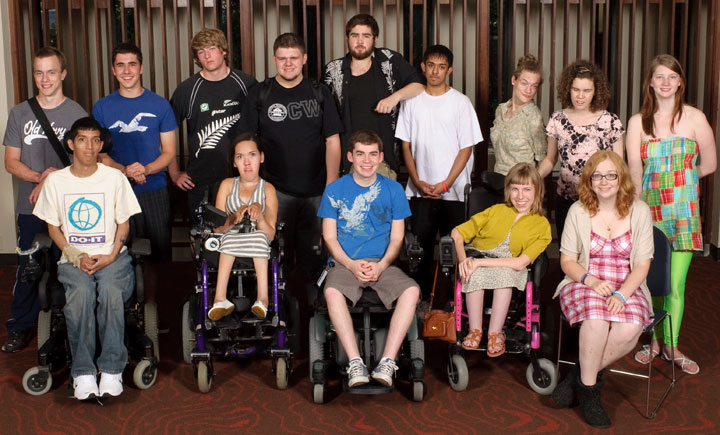 Phase III Scholars are completing high school or transitioning to college. Throughout the year, they communicate with other Scholars, Ambassadors, and Mentors and participate in DO-IT activities. Some become Interns at DO-IT Summer Study and participate in other work experiences. Once Scholars complete Phase II Summer Study and graduate from high school they became DO-IT Ambassadors. DO-IT Ambassadors are pursuing postsecondary studies and careers. They share their experiences with DO-IT Scholars and Pals, encouraging them to pursue their goals in college and employment.

Hi. My name is Vanessa. I am starting my second year at Yakima Valley Community College. I am working towards a legal assistant degree. I enjoy studying the Bible and am a Bible study volunteer. My hobbies include reading, writing, music, and Sudoku puzzles. I love old movies and TV shows. I have athetoid cerebral palsy and mild hearing loss, but I look at these things as keeping my life from being dull. I was a DO-IT Intern at Summer Study 2011.

Hi. My name is Bilal. I graduated from Lynnwood High School in 2011. I currently attend Edmonds Community College and plan to transfer to the University of Washington. I enjoy studying English, and I would like to be an orthodontist some day. I like to play basketball, stay active, and learn new things. I have a learning disability. I was a DO-IT Intern at Summer Study 2011.

Hi. My name is Reese. I graduated from Henry M. Jackson High School in Mill Creek. I have orthographic dysgraphia. I am planning to double major in political science and public relations at Gonzaga University because I want to develop the skills to be an activist for a certain cause. I love hanging out with my friends, composing music, being on the swim team, and going on vacations. I was a DO-IT Intern at Summer Study 2011.

Hi. My name is Anna. I attend Shoreline Community College and am working towards a degree as a special education major. I have a brain tumor; some of the side effects are loss of vision and partial paralysis. I work at Jet City Improv as a house manager. In my free time I like to sleep and write. I was a DO-IT Intern during Summer Study 2011.

Hi. My name is Ryan. I graduated from Sultan High School, where I was valedictorian and a member of the National Honor Society. I also attended Washington Virtual Academy (WAVA) where I took honors courses in chemistry, physics, and digital video production. At WAVA, I was the president of Key Club and also in the National Art Honor Society. In addition, I have taken Running Start classes at Bellevue College and Edmonds Community College, where I was on the Dean's List. I have played timpani in three orchestras, including the Seattle Youth Symphony, and took first place at the WMEA statewide solo competition this year on timpani. Last summer, I toured Europe for three weeks with the Sound of America Honor Band doing live performances in six countries. I've also been on the Youth Advisory Board at the Experience Music Project in Seattle for several years. In the fall, I will be attending Central Washington University as a music performance major, with scholarships that have paid for my first year of school. I hope to become a professional timpanist, as well as a car wash owner, geographer (GIS/mapping expert), and filmmaker. I was a DO-IT Intern at Summer Study 2011.

Hi. My name is Louis. I graduated from Port Townsend High School and have enrolled at American University. I have arranged to take one year off before starting college. During that time, I will be living and working on a dairy farm in New Zealand, then living on a kibbutz in Israel and hopefully fitting in some traveling to the Balkans, Oceania, and southeast Asia. I have dyslexia and dysgraphia. My interests are soccer, rugby, history, writing, politics, sociology, and just about everything else under the sun. I would like to be a lawyer, writer, or economist someday.

Hi. My name is Shelby. I will be a sophomore this fall at Brigham Young University (BYU) in Provo, Utah. I am majoring in communications with an emphasis on public relations. I hope to work in the entertainment, health, or non-profit industries. Maybe all three! At school, I am involved in BYU's student leadership and service group as well as the BYU chapter of Public Relations Students Society of America. I was a marketing intern at a Seattle architecture firm. As a part of the internship, I had an article published in the American School Board Journal about involving students in the design process of schools. In my spare time, I blog at www.shelbyhintze.blogspot.com as well as read other blogs, find new bands on YouTube, and hang out with my friends! I was a DO-IT Intern at Summer Study 2011.

Hi. My name is Allegra. I attended the University of Washington for a year and then transferred to Seattle Central Community College because it was more my pace. My major is currently undecided, but I am leaning toward English or psychology. I love writing and having fun. I have spinal muscular atrophy, which basically kills my muscles, so I use a wheelchair. I love meeting new people, so feel free to email me.

Hi. My name is Sean. I will be a sophomore at the University of Washington, Seattle in the fall and would like to study human centered design and engineering. As an Eagle Scout, I created angled stretching platforms that I donated to Children's Hospital in Seattle. I have Becker muscular dystrophy. I play guitar. I also like boating, driving, and camping. I was a DO-IT Intern at Summer Study 2011.

Hi. My name is Leo. I enjoy mathematics and literature and would like to earn a degree in animation. Someday I would like to have a job that involves either video editing or some animation. My personal achievement this year was that I received more than 150,000 views on videos that I created and posted on YouTube. On the computer, I like to play video games that require building and strategy, like the Sims. I like to listen to most music, with the exception of country. I have a beagle. I have a spinal cord injury that affects the movements of my body—my right side is more limited than my left. I was a DO-IT Intern at Summer Study 2011.

Hi. My name is Josh. I am a graduate of Elma High School and will be attending George Fox University in the fall. My favorite classes in school include band, history, and civics. I played trombone in my high school's jazz and concert bands. Both the jazz and concert bands earned a superior rating at festivals in my senior year, and the jazz band earned first place at a competition in Portland. I am a big sports fan, and I enjoy playing basketball, baseball, and football. I have Charcot-Marie-Toothe, a form of muscular dystrophy. I was a DO-IT Intern at Summer Study 2011.

Hi. My name is Josh. I graduated from Skyview High School in Vancouver. I enjoy studying science and English. In the future I would like be a youth pastor or counselor. I also enjoy art, drawing, and building things. I have two dogs. I have spina bifida and a learning disability.

Hi. My name is Kristin. I attend Whatcom Community College. In high school my favorite class was advanced placement literature. For my senior project I learned how to weld and plan to continue welding in the future. My career goals include archeology or working in the mental health field. I like reading, traveling, hanging out with friends, and playing with my three dogs and my rabbit, Puck. I have dyslexia. I was a DO-IT Intern at Summer Study 2011.

Hi. My name is Alex. I attend Skagit Valley College full time. I plan on earning an associate's degree in criminal justice and then transferring to a four-year university. I would like to become an investigator, forensic pathologist, or medical examiner in the future. In my spare time, I enjoy playing and watching sports, working outdoors with my hands, fixing cars, or just kicking back and doing nothing. I have mild cerebral palsy. I was a DO-IT Intern during Summer Study 2011.

Hi. My name is Joey. I have Asperger's syndrome. I attend Central Washington University where I study computer science. I like computer science because it is concrete and hands on. I was a DO-IT Intern during Summer Study 2011.

Hi. My name is Abby. I work at the Instructional Resource Center. I enjoy French and math. I would like to go into the field of Braille transcription. I like music and musicals, reading and writing fan fiction, and books like Harry Potter and Lord of the Rings. I am blind with light perception.

Hi. My name is Chris. This spring I graduated from Lewis and Clark High School in Vancouver where I enjoyed working in the school's greenhouse. This summer I will travel with a group of college students to several countries in Europe! In fall 2011, I will attend Clark College (it's so close to my home that I can ride my bike), and I plan to study horticulture. Eventually, I may work in a vineyard. I like science, history, math, reading, Xbox games, and being friendly. Writing remains challenging since I have ADD and dyslexia. I have two dogs—a big yellow Labrador Retriever and a small King Charles Cavalier Spaniel.

‹ Phase II Scholars up 2011 Achievement Highlights ›
Back to Top