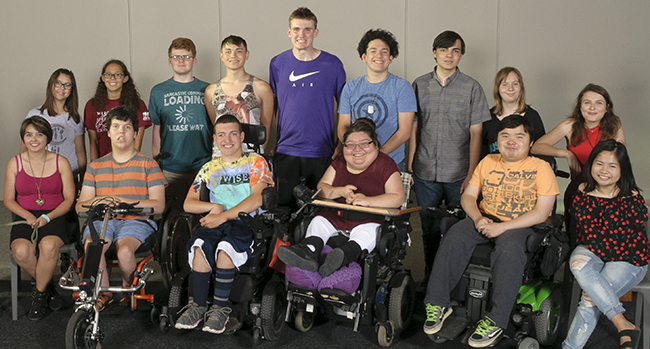 Seventeen Phase II Scholars began participating in DO‑IT in 2016. They completed their second Summer Study at the University of Washington in July 2017. During that second session, they continued to develop self-determination and self-advocacy skills and prepare for college and careers. They worked closely with professionals or university faculty in STEM fields such as neurobiology and robotics. Throughout the year, they communicate with each other, DO‑IT participants, and DO‑IT Mentors. They use laptops, assistive technology, and the Internet to support their academic studies, and they complete projects in exciting fields, including science, technology, engineering, and mathematics. Phase II Scholars communicate with each other at 2016do‑it@uw.edu; with all Scholars and Ambassadors at doitkids@uw.edu; and with the entire group of DO‑IT Scholars, Ambassadors, Pals, and Mentors at doitchat@uw.edu. After completing Summer Study 2017, these participants graduated to Phase III and Ambassadors.

Hello, my name is Adrian. I have been Deaf all my life. I’m a senior at Edmonds-Woodway High School. I play football and want to try out for basketball. In college, I plan to study liberal arts and see what kind of career I’m passionate about! I’d love to attend Gallaudet or any of the colleges close to home in Seattle. I’m excited to achieve all of my goals!

My name is Micayla. I graduated from Ballard High School and will be attending Shoreline Community College. I like art, reading, writing, music, and sports. I play unified soccer and basketball. I write fiction and hope to animate my own show someday. I have left hemiplegia from a stroke and seizures.

Hi, my name is Rochelle. I graduated from The Center School in Seattle. I was the chief associated student body officer in my student senate, and head delegate in the Model United Nations club. I’m a dyslexic student heading to college at North Seattle College. I don’t know what I want to major in yet, but I have plenty of time to figure it out.

My name is Teresa. I’m in my senior year of high school. I am on the varsity dance team and senior class council. I am quite involved at my school and my church as well. I was born without my arms but have learned to adapt through the use of my feet. In the future I would like to attend the University of Washington and major in psychology. I hope to work with teens to help them through drug and alcohol abuse.

Hello, my name is Cameron, and I am a senior at Newport High School in Bellevue. My disability is cerebral palsy, and this causes me to use a wheelchair. My favorite classes are history and math. In college, I hope to major in law, teaching, or sportscasting. I want to be a lawyer because I feel as if people with disabilities are not given a voice because of preconceived stereotypes. I want to be a teacher in order to help foster the next generation of leaders. Finally, I want to go into the field of sportscasting since I watch an obsessive amount of sports. After participating in the DO-IT Summer Study program, I gained more confidence and courage in and outside of school. I want to live independently and go to George Washington University in Washington, D.C.

Hi, my name is Jayda. I graduated from Mount Spokane High School. I will attend Spokane Falls Community College. I have attention deficit disorder and dyslexia. My dyslexia comes up mostly when I’m doing math or sometimes with letters when I’m reading.

Hi, I am Ryan! I live in Shoreline, Washington. I am a senior at Shorewood High School. I have cerebral palsy. I enjoy hanging out with friends, playing video games, and watching YouTube. I currently don’t know what I want to do for a career in the future, but I like to write fiction stories.

My name is Takashi. I graduated from Nathan Hale High School. I am a freshman at Montclaire State University in New Jersey, studying dance. I hope to join a dance company after I graduate.

Hi, my name is Jacky. I’m in 12th grade at Heritage High School in Vancouver. I enjoy playing sports, being with my friends, and listening to music. In the future, I would like to work for Microsoft, because they are interested in people that have my disability. I am a positive thinker, and I don’t let anything get me down or keep me from succeeding. I would also like to be a vlogger someday.

Hi, I am Naomi. I graduated from high school and am currently a student at Cascadia College. My dream is to attend the University of Washington Seattle to study psychology and neuroscience. I love hiking, and I’m training at The School of Acrobatics and New Circus Arts in Georgetown. I also enjoy trampolining and hula hooping. Lastly, I love dogs!

Hi, my name is Serena. I graduated from Chiawana High School. I plan to attend Eastern Washington University. I would also like to make technology for people with disabilities. I have a passion for video games, and I love listening to all kinds of music.

I’m Kyleelynn. I have spastic diplegia, which is a form of cerebral palsy. I’m a senior at John R. Rogers High School. I love to write music, and I plan on pursuing a degree in early childhood education. I am also an honors student. I want to make the world a better place for students with disabilities.

Hi, my name is Rob, and I live in Kirkland. I graduated from Tesla STEM High School in Redmond. I enjoy history, music, and baseball. I am a freshman in the Honors Program at Washington State University where I am planning on studying engineering. I participated in an internship with the Center for Neurotechnology this summer.

Hi, my name is Bryce, and I live in Chelan, Washington. I graduated from Chelan High School in June 2017. I plan to attend Spokane Community College (SCC) next year to play tennis. After SCC I will transfer to Eastern Washington University to get a degree in business. After that I will return to Chelan to farm alongside my father.

My name is Jarrod, and I attend West Seattle High School. I like history, drawing, and writing. I also like to watch anime and indie animations. I don’t really know what I want to be but maybe something in the arts, computer-aided design, social studies, politics, or voice acting.

Hi, my name is Jon. I’m originally from San Diego, but I currently live in Oroville, WA. I graduated from Oroville High School. I was born with cerebral palsy. I like video games and heavy metal music. My goals are to go to college and become a video game developer.

Hello, my name is Ziyu. I am currently a senior at Everett High School. I have Duchenne muscular dystrophy. My favorite subjects are in mathematics and science. In my spare time, I like to explore the great outdoors, play video games, watch movies, and sometimes read. After high school, I plan to attend a four-year college to study technology, combining art and design. I want to work at a tech company such as Google. I recently took an Advanced Placement computer science class, which I enjoyed.

‹ Phase I Scholars up 2017 Achievement Highlights ›
Back to Top