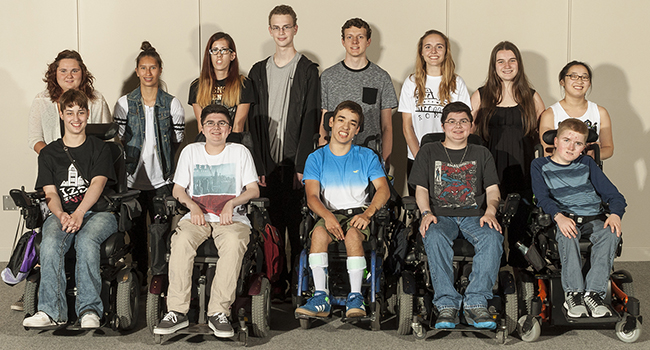 Seventeen Phase II Scholars began participating in DO‑IT in 2015. They attended their second Summer Study at the University of Washington in July 2016. During that second session, they continued to develop self-determination and self-advocacy skills and prepare for college and careers. They worked closely with professionals or university faculty in STEM fields such as neurobiology or robotics. Throughout the year, they communicate with each other, DO‑IT participants, and DO‑IT Mentors. They use laptops, assistive technology, and the Internet to support their academic studies, and they complete projects in exciting fields, including science, technology, engineering, and mathematics. Phase II Scholars communicate with each other at 2015do‑it@uw.edu; with all Scholars and Ambassadors at doitkids@uw.edu; and with the entire group of DO‑IT Scholars, Ambassadors, Pals, and Mentors at doitchat@uw.edu. After completing Summer Study 2016, these participants graduated to Phase III and Ambassadors.

Hello, my name is Emily. I attended Redmond High School. I have spastic paraplegia. I was a member of my school’s golf team, art club, and the National Art Honor Society. I enjoy playing golf, making art, getting people to laugh, and hanging out with friends. I am interested in rehabilitation medicine and my long term goal is to become a rehabilitation physician. This summer, I completed an internship through the Center for Neurotechnology at the University of Washington. I am a freshman at the University of Oregon.

Greetings, I am London, and I have autism. I graduated from North Central High School in Spokane. I attend Spokane Falls Community College. I like video games, visual design, art, music, and fiction. I am unsure of what career path or general field I should go into, so suggestions are appreciated.

Hello, My name is Aspen. I am deaf and use a cochlear implant to hear. I attended Edmonds-Woodway High School full-time, and I was a varsity wrestler for Arlington High School. This year I am attending the Washington School for the Deaf. I enjoy being active outdoors. My favorite activity is spending quality time with family and my friends and being laid back. My long term goal is to be an English professor. I hope to pursue a professional athletic career as well.

Hi, I’m Laszlo! I have cerebral palsy. I am a senior at Ingraham High School, and I enjoy math and science classes. I would like to have my own talk show someday. I love taking on leadership roles. I am an Associated Student Body (ASB) Representative for Student Council. I enjoy listening to Kid Ink, Chris Brown, Pitbull, Iggy Azalea, and many more. In my freshman year, I competed in the 2014 King County Special Olympics Track and Field team. I went to the State Championships in Fort Lewis, competing in the 50 meter motorized wheelchair slalom, 30 meter motorized wheelchair slalom, and softball throw. I went home with three gold medals. For fun, I like to play games, and talk to friends on Facebook. I plan to major in radio and communications.

My name is Chana. I am a senior at Wilson High School in Tacoma and take Running Start classes at Tacoma Community College. I have cerebral palsy. My favorite subjects in school are English and French. In my free time, I enjoy reading books, listening to music, and watching movies. I also enjoy musical theatre. I have a dog named Wrinkles. My goal is to become a pediatrician.

My name is Andrew. I just finished my senior year at Anacortes High School. I was part of the Anacortes Robotics Team for three years. On the robotics team we have qualified to go to St. Louis for the world championship every year. I like to hike and play video games. I am interested in nature and how it works. I am going to Western Washington University for an environmental science degree. I am deaf.

Hey there. My name is Max, and I graduated from Camas High School. I am a freshman at Gonzaga University.  I have Asperger’s syndrome. My main pleasures in life are learning about linguistics and attending my Kung-Fu class. I really want to be a computer engineer. I go on my computer a lot for fun, which tends to neatly overlap with linguistics research. I also play plenty of games.

Hi, my name is Dewald. I graduated from Bellingham High School. I have cerebral palsy. I was born in South Africa as the middle kid of a set of triplets and weighed only two pounds when I was born. My favorite subjects are history and psychology. I was a wrestler on my school’s varsity team. I am a fanatical follower of soccer and support the USA teams and the Seattle Sounders. I plan to attend Whatcom Community College before attending a four-year school. My goal is to become a social worker.

Hi everyone, I’m Kaitlyn but feel free to call me Katie or Kate. This last June I graduated from Naches Valley High School. I have cerebral palsy. I enjoy listening to music, drawing, gaming, and writing stories. I also like making friends and chatting with those people I know. I am a freshman at Central Washington University.

My name is Eli. I have Duchenne muscular dystrophy, and I am in 12th grade at North Thurston High School. I play percussion. I enjoy reading, sports, music, astronomy, and video games. I have three cats and one dog; my dog looks similar to a baby bear. My long term interests are to be a sports analyst/writer, astronomer, historian, or to work in the music industry.

Hey, my name is Jonah. I am a senior at North Thurston High School. I am a member of the National Honor Society. My favorite bands are the Foo Fighters and The Red Hot Chili Peppers. I love history and sports. For fun, I watch sports and play video games. My long term goal is to be a sports writer or a historian. I have Duchenne muscular dystrophy.

Hi, my name is Brookelyn. I am a senior at White River High School in Buckley, Washington. I raised pigs last year for Future Farmers of America. I showed my Supervised Agricultural Education hog at the Washington State Fair in April, and won reserve champion (2nd place champion) for my pig. I also got 9th place in showmanship and 6th place in novice shows. I also participated in the Unified Special Olympics in bowling, basketball, and soccer. I accomplished many things this year: I took a mainstream English class and was invited to participate in Chamber Choir. I have autism spectrum disorder and learning disabilities. I love reading, sports, art, biology, and singing.

My name is Hailey. I am a senior and actively participate in leadership roles at Cheney High School. I like cooking, listening to music, watching movies, enjoying the great outdoors (fishing, camping, boating, kayaking), and hanging out with friends. After high school, I plan to attend a college to further my education to become an elementary school teacher. I enjoy working with younger kids. I have attention deficit disorder and a learning disability.

Hi, I’m Tasha. I finished high school early through Spokane Community College. I’m really into fitness, working out, and sports. I enjoy many sports, but my favorite is wrestling; I have been a wrestler for over five years. My long term goals are to study kinesiology in college and become a personal trainer.

Hello, I’m Ryan. I graduated from Mt. Spokane High School and have a learning disability. I was a member of the National Honor Society. My hobbies include singing, fishing, working out, doing anything football related, volunteering whenever I can, and, most of all, spending time with my family. I am a freshman at Whitworth University, where I plan on studying athletic training with minors in either exercise science or kinesiology.

Hi my name is Katelyn. I graduated from Bonney Lake High School. I am a freshman at Pierce Community College. I have myotonic muscular dystrophy, which affects my limbs and face. I enjoy the outdoors and taking walks. My hobbies include being on YouTube, hanging with friends, and listening to music, especially metal. I absolutely love cats!

Hello, my name is Grady. I am a senior at Puyallup High School, and my favorite subjects are Spanish and math. I am involved in two service organizations at my school: Key Club and Viking Knights. My favorite Key Club project is volunteering twice a week as a math tutor for fourth and fifth graders at my local elementary school. I enjoy computers and keeping up with the latest technology news. After high school, I plan to attend a four-year university to study business and technology. I have congenital muscular dystrophy.

‹ Phase I Scholars up 2016 Achievement Highlights ›
Back to Top