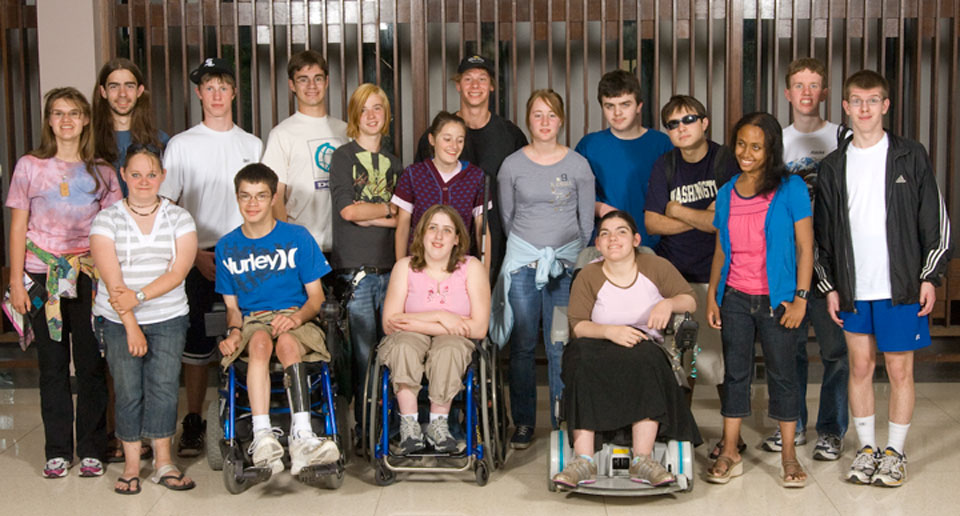 Twenty-one Phase II Scholars began participating in DO-IT in 2007 and 2006. They attended their second Summer Study at the University of Washington July 2008. During that second session, they continued to develop self-determination and self-advocacy skills and prepare for college and careers. They also worked closely with field-based professionals or university faculty on film development, virtual reality, bioengineering, computer programming, or environmental legislation. Throughout the year, they communicate with each other, DO-IT participants, and DO-IT Mentors. They use the Internet to support their academic studies, and they complete projects in exciting fields, including science, engineering, mathematics, technology, and business. After completing Summer Study 2008, these participants graduated to Phase III.

Hi. My name is Peter. I was born and raised in Walla Walla. Although my disability can limit me at times, it has helped me gain strong computer skills. I graduated from high school this spring. I would like to attend Walla Walla Community College and pursue a career in computer technology and video game testing.

I am Liz. I am a senior in high school. In my spare time I like to go horseback riding and hang out with my friends. My dream is to be a florist.

Hello. I'm Blake and I'm a senior at River Ridge High School. I'm a percussionist in my school's band. I mostly play bass drum, but I have played other instruments such as the gong, triangle, and cymbals. Every year in September, the band takes a trip to Leavenworth, WA, to march in the Autumn Leaf Festival Parade. I hold the school banner, since I cannot play and drive my electric wheelchair at the same time. Last year, the band also took a trip to San Francisco. We played outside of Monterey's city hall and inside Oregon State's capitol building. I am also in Boy Scouts where I am working on my Eagle rank. My plans after high school are to go to either Saint Martin's University, South Puget Sound Community College, or Seattle Pacific University to study computer science. I have cerebral palsy.

My name is Dylan. I have left-side hemiplegia, which primarily affects my left hand and arm. I am a senior at South Whidbey High School. I like technology and art classes. In my spare time I enjoy hanging out with my friends and using the computer for Internet, chatting, and music. My main hobby is drawing; I'm a very good artist. In the future I hope to have a job that includes art, technology, and/or sound engineering. Over this past year I have undergone successful open heart surgery.

Hi. I'm Jennifer. I graduated from Auburn High School and I have cerebral palsy. I plan to go to Green River Community College and transfer to a four-year college to study psychology. In my free time I like to listen to music, explore the Internet, play on my computer, and hang out with friends.

Hi. My name is Robyn. I have a high frequency hearing loss and wear hearing aids. This spring I graduated from Shorecrest High School where I played varsity soccer and golf. In golf, I qualified for the state tournament in Bellingham. Next year I will be taking the next step toward my dream career and the opportunity to work with athletes. I will be heading to sunny California to attend Chapman University. I plan to major in athletic training.

Hello. My name is Stefani. I am a senior at Sprague High School in eastern Washington just southwest of Spokane. This past year, I was the treasurer of my county's Future Farmers of America chapter. I was elected student body president for my school, which I am very excited about. I love practicing my instruments so I can keep my trumpet skills sharp for band class and pep band activities. I enjoy hanging out with my friends, swimming in my pool, and, like most teenagers, cruising the Internet. I have a connective tissue disorder called Ehlers-Danlos syndrome (EDS).

Hi. My name is Joshua. I graduated from high school this spring and plan to enroll in computer design classes at Grays Harbor College. I enjoy reading and playing video games. My career goal is to be a video game designer.

Hi. My name is Sam. I am a senior at Nathan Hale High School. I recently rode 250 miles on a bike to Las Vegas as a fundraiser for Friedreich's ataxia, the mobility impairment I was diagnosed with last year. This impairment affects my balance. I have also raised a guide dog and am an insane sports fan. I love to play baseball, basketball, and football, as well as downhill ski. I hope to go to a four-year college and pursue a career in sports.

Hi. My name is Ashlee. I am a senior at North Kitsap High School and I participate in Running Start courses at Olympic Community College. My favorite subjects are English, social studies, science, and music. I play the drums and enjoy reading, swimming, and eating ice cream. My career goal is to become a psychotherapist.

Hi. My name is Amrit. I have attention deficit disorder (ADD). I graduated from Lakeside High School this spring, and I am going to Haverford College (outside of Philadelphia) in the fall. After two summers of foot surgery, I suited up and played for the Lakeside Lions for the first time. I received honorable mention in the Seattle Times. I love playing jazz piano and listening to NPR's the Swing Years and Beyond radio music program. I'm glad to be part of DO-IT because it offers me connections that will help me in my future.

Hi. My name is Sam. This year I am participating in the Running Start program at my high school. I want to study engineering, aviation, literature, and writing. I've been working toward obtaining a private pilot's license. I have cerebral palsy, which technically limits my range of motion but it does not limit me or my ability to function. I also have dyslexia, dyscalculia, and dysgraphia. Reading, writing, and math are difficult, but my comprehension is high. In other words, I can read like a second-grader, but comprehend like a college senior. It is like being an unsolvable puzzle. To work around this, I get many of my textbooks on CD and use voice recognition software for writing.

Hi. My name is Cory. I live in Poulsbo, WA. I was born in Providence, RI, and, because my dad is in the Navy, I have lived many different places, including Hawaii; San Diego; Rota, Spain; and La Maddalena, Italy. It was in Spain that my Asperger's syndrome began to greatly impact my life. There, I was bullied and teased because the other students could see that I was different. This made my years of school in Spain and Italy difficult and lonely. Otherwise, my years in Europe were the best of my life, because of the places I got to go and the cultures in which I lived. By the time I came to Poulsbo, I had retracted into a shell to protect myself; but in my junior year I made two friends who helped me open up. They welcomed me into their group, and I was able to learn social skills I needed to function in society. I came out of my cocoon. I am now respected and admired by many of my classmates. I enjoy listening to metal music, long distance running, and I take great pride in my long hair. I plan to study political science at the Evergreen State College in Olympia and run for President.

Hi! My name is Melissa. I am a senior at Woodinville High School. My favorite subjects are math and English. I have spina bifida, which affects my mobility and my motor skills. In my free time I like to watch television, use the computer, read books, and write. I plan to go to college to become an English teacher so I can put my love of books and reading to good use.

Hi. My name is Scott and I am from Anacortes, WA. I graduated from Anacortes High School this spring. I am interested in math and physical education. I have a learning disability called dyspraxia, which makes it hard for me to take notes when instructors are speaking or writing on the board or an overhead, so they make a copy of those materials just for me. I am planning to go to Skagit Valley College and would like to major in outdoor recreation. My career goal is to be a park ranger, because I like the outdoors and I like working with my hands. I enjoy tennis, soccer, Ultimate Frisbee, hiking, cross-country running, hanging out with friends, and playing games.

My name is Luke. I am a senior at Curtis Senior High School. I have an organizational problem, but, mostly, I have attention deficit disorder (ADD). My favorite classes are algebra and biology. I am planning to go to Tacoma Community College after I graduate. I am usually shy. I do socialize when I know someone but am nervous when using the phone or doing something that is not very comfortable for me.

Hi, my name is Sara. I graduated from Mountlake Terrace High School this spring and will be attending Evergreen State University this fall. I have a visual impairment. I love to write stories, and I enjoy reading poems. I am at DO-IT to improve my math, science, and computer skills.

Greetings, Heidi here, but you can call me Phoenix. I am a female Aspie (which makes it interesting around the DO-IT watering hole, as most Aspie's are male). Aspie, in my home language means one with Asperger's syndrome. I am an aspiring writer and librarian. I have been published three times. I recently graduated from Redmond High School, where I received honors. I take classes at Cascadia Community College in library sciences, English, creative writing, and comparative literature. I am a dedicated track and cross-country runner as well as a prolific staff member of a literary magazine. I'm very open to life in general but am interested in Asian culture, comedy, writing, anime (manga), and Aspie/geek/alternative culture. I am looking forward to DO-IT helping me increase my technical proficiency, which will help me achieve my literary aspirations.