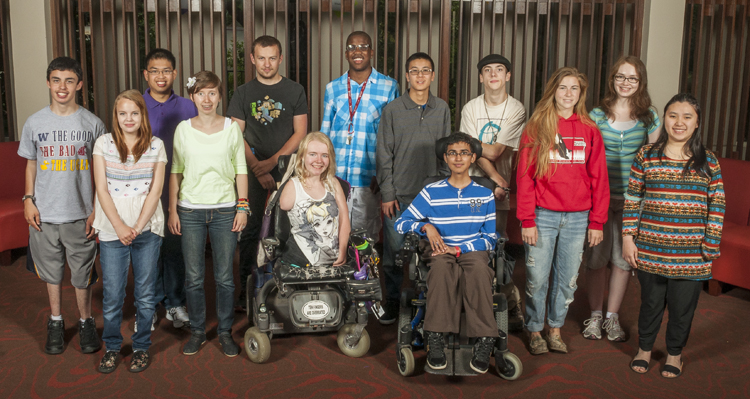 Seventeen Phase II Scholars began participating in DO‑IT in 2013. They attended their second Summer Study at the University of Washington (UW) in July 2014. During that second session, they continued to develop self-determination and self-advocacy skills and prepare for college and careers. They also worked closely with professionals or university faculty in STEM fields such as neurobiology, digital arts, or environmental issues. Throughout the year, they communicate with each other, DO‑IT participants, and DO‑IT Mentors. They use laptops, assistive technology, and the Internet to support their academic studies, and they complete projects in exciting fields, including science, technology, engineering, mathematics, and business. Phase II Scholars communicate with each other at 2013do‑it@uw.edu; with all Scholars and Ambassadors at doitkids@uw.edu; and with the entire group of DO‑IT Scholars, Ambassadors, Pals, and Mentors at doitchat@uw.edu. After completing Summer Study 2014, these participants graduated to Phase III.

What’s up, everyone? My name is Antonio. I was born with cerebral palsy which has affected my mobility. I’m a huge sports fan (Seahawks, Mariners, Sounders, Huskies). I love listening to hip-hop. My favorite bands are Dilated Peoples, Bambu, and the Seattle-based Blue Scholars. I graduated from O’Dea High School in Seattle. I will be attending the UW this fall, and I’m excited to be a Husky! I would enjoy a career in journalism/sports broadcasting.

Hi, my name is Dustine, and I have Asperger syndrome. I played the flute with the Roosevelt High School Band. I am undecided on a field of study, although I am interested in law, computer science, and IT fields. I enjoy keeping up with Seattle sports, especially the Seahawks and the Sounders FC. I also bowl competitively in leagues and tournaments. I graduated from Roosevelt and will attend the UW in the fall and play in the Husky Marching Band.

Hi, my name is Michael. I enjoy computer programming in Visual Basic and would like to become a program analyst. I enjoy taking photos of nature, reading, building plastic military models, and playing racquetball. I have autism. My greatest accomplishments are being accepted into DO-IT, getting a C+ in Spanish 2, and making honor roll. I attend Bellevue College.

Hi, my name is Courtney. I have a visual impairment, but I also have a very supportive family. Listening to music is possibly my favorite pastime; I do it almost constantly. I play the flute in the symphonic band at school. I’m also an avid reader. I will read most anything, but I tend to linger in the sci-fi/fantasy realm. That’s just a bit about me. I did the YES program this summer.

Hello! My name is McKenna, and I was born with arthrogryposis. I am currently a resident athlete at the Olympic Training Center in Colorado Springs, training for the 2016 Paralympic Games. I just graduated high school with my high school diploma and my associate’s degree in arts and sciences because I did Running Start at Everett Community College. I am currently on the National Paralympic Development Shooting Team and hope to represent the United States at the 2016 Games in Rio de Janeiro for my air rifle events. After the 2016 Games, I plan on going back to school to become a lawyer. Feel free to email me anytime!

Hi, my name is Ryan, and I have Asperger syndrome. I attend Shadle Park High School in Spokane. I hope to get a degree in mathematics with a focus on engineering of some sort. I enjoy designing and building complicated machinery in Minecraft.

Hi my name is Julian, and I have traumatic brain injury. I graduated from Kamiak High School in June and will be attending Washington State University this fall. I plan to major in sports management and eventually coach professional basketball. For now, the journey is just starting so I look forward to enjoying Coug and Dawg events this fall. Go Cougs!

Hi, my name is Ellen, and I have a speech-based learning disability. I am going to pursue a bachelor’s degree in Unmanned Aircraft/Operations at the University of North Dakota. Last summer, I attended the first unmanned aerial vehicle (UAV) camp in the country for high school students at the Embry-Riddle Aeronautical University in Prescott, Arizona. I have been an intern for The Patriots Flight Team and the Blue Angels during Seafair. I’ve been playing soccer since I was six years old, and I love it. I foster kittens at my home for The Seattle Humane Society. I have jump seated in a brand new Boeing 737-900 ER twice during take-off and landing. When I get the chance, I like to fly airplanes. I actually flew a Cessna twice as the main pilot. I met Harrison Ford in Los Angeles this past February.

Hi, my name is Clarissa, and I have cerebral palsy and left-sided hemiplegia. I live in Everett and graduated from Kamiak High School. I will attend UW Bothell this fall. I like learning foreign languages; I’m currently learning Japanese. I also enjoy singing and listening to music. In the future I’d like to travel to Japan and other places around the world.

Hi, my name is Brenna, and I have a learning disability. I will be a senior this fall and am in Running Start. I was the youngest filmmaker in the Port Townsend Film Festival. I enjoy photography and the outdoors.

Hi, my name is Nicole and I have cerebral palsy. I attend Kentwood High School in Kent. I would like to pursue a master’s degree in special education with some studies in business. I am also considering a career as a writer, since I enjoy my English classes.

Hi, my name is Rahil, and I have Duchenne muscular dystrophy. This fall, I’ll be a senior at Bothell High School. My favorite subjects are science and Spanish. I also enjoyed a computer programming class last year. I like reading and playing video games in my free time. Last year, I was in Youth and Government, a YMCA program where the participants simulate a state legislative session. I am also a member of the National Honor Society.

Hi, my name is Alex, and I have cerebral palsy. I use my artistic abilities to express myself. I just graduated from Walla Walla High School, where I enjoyed studying math and science. I’m interested in learning about space travel and understanding the universe. I want to pursue a career as a pastor or a counselor. I’m going to start at Walla Walla Community College this coming September, and then I want to go to Seminary.

Hi, I’m Karly! I have nonverbal learning disorder and attention deficit disorder. I am doing an extra semester of senior year at The Nova Project in Seattle, then I will be attending North Seattle College starting next spring quarter where I will study child development and teaching. I volunteer at Lowell Elementary School with kids who have various disabilities, teaching them basic life skills.

Hi, my name is Hannah, and I have a visual impairment. Even with my vision, I love to read and write. I enjoy English in school but am also into science, especially the biomedical field. I also play the flute in my school band. I love to volunteer around the community and I am a member of the National Honor Society.

Hi, my name is Kayla, and I live in Lynnwood. This past spring, I graduated from Mountlake Terrace High School. I am interested in math, English, and science. In the fall I will be a freshman at the UW in the honors program, where I’m planning on double majoring in Spanish and psychology or English, with a possible minor in disability studies. After I get my undergraduate degree, I hope to go to law school to pursue a career as a bilingual disability rights lawyer. I swim for the U.S. Paralympic National Swim Team, and I hold four world records. Last August, I participated in the Paralympic World Championships in Montreal, in Quebec, Canada, and this August I will participate in the Para-Pan American Games in Pasadena, California.

Hi, my name is Olivia, and I have cerebral palsy. I attend Mt. Rainier High School and am a Running Start student at Highline College. My favorite subject is science. By next year, I will graduate with my high school diploma and associate’s degree. I hope to transfer to the UW for pre-pharmacy school.