In Memory of Andrew and "Grouchy"

Andrew was one of our '95 DO-IT Scholars . . . bright, witty, upbeat, always ready for a new challenge. Some of us still remember his e-mail signature:

Andrew :)
"Nobody said life would be easy. They only said it would be worth it!"

Andrew's parents wanted us to know that "DO-IT was one of the best things in Andrew's life." In an e-mail message to DO-IT participants they said, "We want to thank all of you for making this past year of Andrew's life so much more fulfilling, rewarding and adventurous. He was so excited by the vision that the DO-IT program offered him. He was always talking about how he was going to go to college and get a degree in computer drafting and he was going to grab the tiger of life by the tail. He was going to set up his own business here at home and conduct his business via all the latest in communication technology. Unfortunately, his life energy ran a little short of his ambitions." 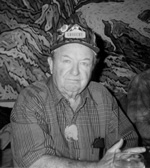 Max Maizuss (known to many as Grouchy) began volunteering for DO-IT Summer Study in 1995 when he was 72 years old. His daughter and grandson (James, p. 54), who work for DO-IT during the summer, kept telling him what a great program it was, so he said he would come to one event. That's all it took. From that time on he was there whenever he was needed. Max loved people; he especially enjoyed talking to Scholars about what they planned on doing in this ever-changing world. Max said the younger generation helped him stay young at heart.

Max had two children, six grandchildren, four great grandchildren. He was an active member of Elks Veterns of Foreign Wars and Masons, and volunteered at the Issaquah Food and Clothing, the Quartzsite Improvement Association, and the Quartzsite School District. Max lived in his 5th wheel and traveled between Quartzsite, AZ in the winter and Redmond, WA in the summer. He died May 8, 2000, in an automobile accident.

DO-IT lost a good friend. "Grouchy" will never be forgotten.

‹ '93 Ambassadors up Staff Mentors ›
Back to Top