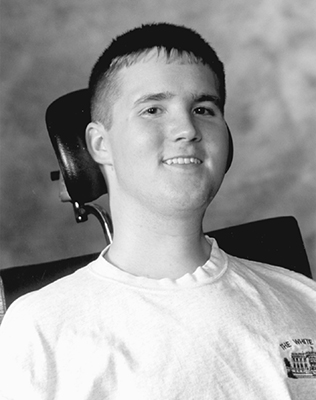 Roy was born in Aberdeen, WA. At age seven he was diagnosed with Duchenne muscular dystrophy, a congenital and progressive muscle-wasting disease with no cure. Not letting his disease define him, Roy became a top student and graduated from Hoquiam High School in 2000. He also became an Eagle Scout. He received his associate of arts degree from Grays Harbor College and then his bachelor of science degree in computer science from Central Washington University in 2005. He worked contracts including user interface accessibility as a software tester at Microsoft until his health declined. He then worked from home for Maker’s Tool Works, a company that sells desktop 3D printer kits.

Roy wrote this message for his family and friends before he left: “Know that I love you all very much, and want you to live your life like I did, always fighting and not letting any hardship slow me down. Reach for the stars. I pray for you that we will meet again in Heaven for eternity. Just trust in God and Jesus like I have. Love, Roy.”