The DO‑IT Trailblazer award highlights DO‑IT community members who forge new pathways that will benefit others. Through their work and accomplishments they have changed the way the world views people with disabilities and have increased the potential of people with disabilities to succeed in college, careers, and community life. Congratulations to this year’s honorees!

Dr. Norm Coombs is the chief executive officer of Equal Access to Software and Information, an organization that provides webinars and online resources for making information technology accessible to people with disabilities. Norm, who is blind, has experienced the power of assistive technology firsthand and is dedicated to providing the same opportunities to others. He is a professor emeritus from the Rochester Institute of Technology (RIT) where he taught history for thirty-six years. He pioneered RIT’s distance learning program and was given Zenith’s Master of Innovation award for his uses of distance learning to mainstream students with disabilities. Norm has co-presented with DO-IT at conferences and workshops, contributed to case studies in the DO-IT Knowledge Base, and partnered with DO-IT founder and director Sheryl Burgstahler to develop and teach a distance learning course about accessible technology. 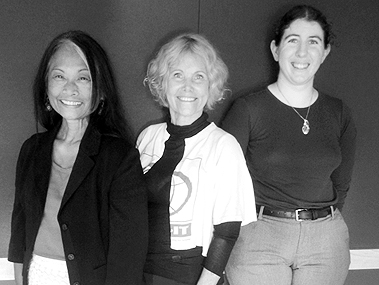 Myrna Muto, a coordinator of Seattle Public Schools counselors, has been an active advocate for preparing high school students with disabilities for college and careers. She has partnered with DO-IT staff to develop and disseminate newsletters, host events for students, and facilitate trainings and workshops for Seattle Schools educators and staff. Myrna has been a creative and energetic partner on a Boeing-funded project, Making Seattle Public Schools Career and Technical Education Programs Accessible to Students with Disabilities, and has helped facilitate field trips with students to industry partners. She is committed to including students with disabilities in all programs and activities offered at Seattle Public Schools. Myrna earned a degree in education from the University of Washington (UW) and a master’s degree in school counseling from Seattle University.

Vincent Martin, an AccessComputing team member, has been an active member of and mentor on DO-IT’s e-mentoring communities, giving invaluable advice on technical details, complex software/hardware interaction, and accessible technology for postsecondary education. One staff member shared, “I can’t tell you how many times DO-IT students have told me they got great advice from him behind the scenes.” Vincent has provided assistance at conferences and mentoring during events. At the DO-IT sponsored capacity-building institute at Auburn University, Universal Design in Academia, he delivered an excellent presentation “Defining and Designing the Human Interface: Disabilities in STEM Education.” Vincent also spoke on behalf of mentors and students at the National Science Foundation in Washington, DC during a DO-IT event. He is pursuing a doctorate in human-computer interaction at the Georgia Institute of Technology. He also holds degrees in psychology and textile engineering technology.

Dr. Kelsey Byers is an active mentor to undergraduate students and graduate students participating in DO-IT projects and has delivered countless presentations on equal access in academics, fieldwork, governance, student events, and other aspects of campus life. One DO-IT student shared, “I often see Kelsey at DO-IT events. She has a great deal of experience in advocacy and equal access and is always willing to share stories and exchange ideas.” Kelsey earned a Ph.D. in biology at the UW in 2014. She has been active in the broader UW community, making important contributions on several committees, student groups, and other entities that promote access and inclusion for everyone.

Dr. Bea Awoniyi, long-time DO-IT collaborator, Santa Fe College assistant vice president of Student Affairs, and president elect for the Board of Directors of the Association on Higher Education and Disability (AHEAD), for her work to better serve students and veterans with disabilities, including substantial contributions to DO-IT resources and the AccessCollege project.

Anna Marie Golden, founder and manager of AnnAtycal Web Studio, DO-IT Mentor, and part of the team at UW’s Accessible Technology Services, for outstanding mentoring and her work to increase accessibility on the Internet, including the development of an accessible website for the Deaf-Blind Service Center.

Susan Gjolmesli, director of the Disability Resource Center at Bellevue College, DO-IT Mentor, and project partner, for outstanding advocacy in the promotion of accessible campuses and the development of the Autism Spectrum Navigators Program. She was designated as a Living Treasure at Bellevue College in 2009 and received the Washington State Governor’s Trophy in Memory of Carolyn Blair Brown in 2012.

Michael Richardson, co-director of the Northwest ADA (American with Disabilities Act) Center and DO-IT Mentor, for his relentless advocacy and enthusiasm for the participation of people with disabilities in all aspects of our community.

Katrina Carter, DO-IT Ambassador and ‘98 Scholar, for her advocacy in founding a disability student group at the UW, Bothell; and her work in the National Youth Leadership Network, Think First National Injury Prevention Foundation, National Leadership Conference for Youth with Disabilities, and the Army Corps Equal Employment Opportunities Commission.

Dyane Haynes, DO-IT Mentor, DO-IT partner, and director of Disability Resources for students at the UW, for her tireless efforts in sharing disability resources and promoting universal design through capacity-building institutes, as well as her work within DO-IT Admin, DO-IT Prof, DO-IT College, and AccessSTEM projects.

Conrad Reynoldson, DO-IT Ambassador and ‘03 Scholar, for his work to raise disability awareness in the community. He was the first person to use a power wheelchair in the Rock ‘n’ Roll Seattle half marathon, has organized comedy nights to increase the visibility of people with disabilities, completed an internship at Disability Rights Washington, and was a Congressional Intern in Washington, DC.

Laura Bersos, DO-IT Ambassador and ‘04 Scholar, for developing community among DO-IT Scholars and participants. Laura has attended Summer Study every year since she became involved with DO-IT.

Kayla Brown, DO-IT Ambassador, ‘05 Scholar, and DO-IT student staff member, for advocacy work at Bellevue College and nonprofits. She advocates for people with disabilities in Seattle, traveled to New Orleans to help rebuild after Hurricane Katrina, participated in City Year, and has served on the ATeam leadership group for DO-IT’s AccessSTEM project.

E.A. Draffin, research staff in the University of Southampton’s School of Electronics and Computer Science in the United Kingdom, for promoting accessibility in e-learning, the web, and mobile devices; providing an international database of accessible technology; and supporting students with disabilities to increase accessibility in education, employment, and their daily lives.

Dr. Martha Bosma, associate professor of biology at the UW, for her leadership in the inclusion of people with disabilities in science education and careers, outreach to ensure accessible science labs, and mentoring of DO-IT Scholars in their transition to postsecondary education.

Corinna (Lang) Fale, DO-IT Ambassador and ’00 Scholar, for her work promoting self-advocacy for people with disabilities through her position as co-coordinator of the L.E.A.D. Coalition at the Arc of Snohomish County and as a representative for People First of Washington.

Dr. Sang-Mook Lee, professor of geophysics at Seoul National University, for promoting access to technology, education, and employment for people with disabilities in South Korea.

Noah Seidel, DO-IT Ambassador, ’05 Scholar, and DO-IT student staff member, for his disability advocacy and leadership on the UW campus and in the Seattle community. He has organized disability awareness events and has spoken on numerous panels regarding inclusion, access, and transition to college and careers.

Priscilla Wong, DO-IT Ambassador and ’95 Scholar, for her volunteer work serving people with disabilities at the Ronald McDonald House and Children’s Hospital and ongoing dedication to advocating for accessible programs and environments.

Kim Borowicz, disability rights lawyer at Access Living and DO-IT Mentor, for contributions on a national level to the field of disability law and a commitment to tackling issues of access to transportation, media, and education for people with disabilities.

Loren Mikola, disability inclusion program manager at Microsoft and AccessSTEM team member, for contributions in making Microsoft an inclusive environment for employees with a wide variety of abilities and for promoting the design of accessible technology.

Kris Rosenberg, DO-IT Ambassador and ‘94 Scholar, for contributing to the long-term success of DO-IT’s college preview and technology program at Camp Courage by volunteering his time to provide lab set-up, technology support, instruction, and mentoring.

Jessie Sandoval, DO-IT Ambassador and ‘98 Scholar, for academic achievement and pursuit of a career in disability law.

Chris Schlechty, DO-IT Ambassador and ‘02 Scholar, for academic achievement, pursuit of a career in computing, and mentoring interns with disabilities nationwide in the workplace.

Al Souma, coordinator of Disability Support Services at Seattle Central Community College and AccessCollege team member, for responding to emerging issues of students with disabilities, including those related to people with mental health impairments and veterans with disabilities.

Dr. Mamoru Iwabuchi, associate professor at the Research Center for Advanced Science and Technology at the University of Tokyo and assistant director of DO-IT Japan, for promoting DO-IT practices internationally.

Anthony Arnold, DO‑IT Ambassador and ‘94 Scholar, for significant contributions to the field of augmentative and alternative communication through his advocacy and career, and serving as a powerful role model for the employment of individuals with disabilities that affect both mobility and speech.

Dr. Ray Bowen, while dean of the University of Washington College of Engineering, made contacts at the National Science Foundation in 1992 that led to DO‑IT’s first grant funding. He mentored Dr. Sheryl Burgstahler, director and founder of DO‑IT, and facilitated collaborations with the college’s award-winning programs for women and minorities. This created an expanded view of diversity that became a model for other departments and institutions.

Dr. Imke Durre, DO‑IT Mentor, for accomplishments in earning a Ph.D. and pursuing a career in atmospheric sciences, increasing public awareness of the positive contributions of people with disabilities in science fields, and providing a strong role model and mentoring to students with visual impairments.

Karen Braitmayer, architect and DO‑IT Mentor, for accomplishments as a business owner and for progressing accessibility efforts within the field of architecture.

Mylene Padolina, Microsoft senior diversity consultant, for accomplishments in the integration of disability in the diversity efforts of businesses and for success in programs encouraging youth to pursue high-tech career fields.

Jessie Shulman, DO‑IT Ambassador and ‘98 Scholar, for accomplishments in increasing access and support on the UW campus and providing a strong role model to students with hidden disabilities.

Dr. Suzanne Weghorst, assistant director for research at the UW Human Interface Technology Lab, for accomplishments in research and for providing numerous opportunities for students with disabilities to explore the field of human interface technology.

Mike Dedman, education specialist at the National Parks Service, for improving access in the national parks.

‹ Snapshots 2014: A Yearbook for DO-IT Participants up Phase I Scholars ›
Back to Top