Phase I of the project to build wǝɫǝbʔaltxʷ – Intellectual House came to completion when the University of Washington and Native American communities celebrated its grand opening on March 12, 2015.

Phase I included construction of an 8,400 square-foot building that features a gathering hall for 600, a large kitchen that accommodates teaching space for indigenous food preparation and a meeting space. Also included is an outdoor gathering circle.

The planning process received input and guidance from UW community members, an elders committee and regional tribes. Funding for Phase I was provided through the UW, individual gifts, organizations, communities, corporations, foundations and government organizations. A site blessing was performed on April 10, 2009 and the groundbreaking was held Oct. 25, 2013.

Click on the links below to learn more about Phase I:

Fundraising for Phase II – a Teaching and Learning space – is underway. Information on how to support these efforts can be found here.

Rising from Hallowed Ground: wǝɫǝbʔaltxʷ – Intellectual House is a place the UW Native American community can call home. Read the cover story of the June 2015 issue of Columns Magazine.

As home for Native learning opens, a dream is realized. Read more here.

View photos of the construction process, including the August 6 Log Blessing.

The UW broke ground on wǝɫǝbʔaltxʷ, Oct. 25, 2013, celebrating a significant milestone in the 40-year dream to build a longhouse on campus. Read more here.

The schematic design, site plan and floor plan have been approved for the Intellectual House. Read more here.

UW Interim President Phyllis M. Wise has pledged $5 million in matching gift funds toward the $10.6 million needed to build the Intellectual House if $5 million can be raised by the end of 2011. Make a gift towards this total here.

UW Regents approve traditional naming of the House of Knowledge to Wǝɫǝbʔaltxʷ, which translates to “Intellectual House” in the Lushootseed language and is phonetically pronounced “wah-sheb-altuh”. Read the details here.

Jones & Jones have been selected as the architects for the Intellectual House. Their predesign for the project was completed in June 2010. See their work here.

Yakama Nation to donate materials valued at $91,000 to the Intellectual House. Read the details here. 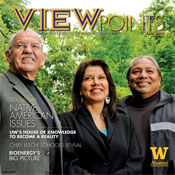 In order to reserve a space at wǝɫǝbʔaltxʷ, you must first submit an online request through the Reservation Request Form. This represents a request ONLY and does not guarantee you a space. The information you provide will be used to determine whether we are able to accommodate your request.