Summer Study '05: What Do the Phase II Scholars Do?

Phase II Scholars return to the University of Washington campus for their second Summer Study. They meet the Phase I Scholars as they participate in their first Summer Study, learn about college life and career preparation, and participate in a one-week workshop with postsecondary instructors.

At DO-IT Summer Study we learned a lot about Web accessibility - making the Web more accessible for people who have disabilities, some using assistive technology. One of the types of assistive technology that we learned about is a "speaking browser" called Home Page Reader™. People who use Home Page Reader™ are often people who have reading disabilities or visual impairments. We also learned that some people unable to use a mouse may just use the keyboard to navigate the Web using a variety of Web browsers, such as Internet Explorer™. 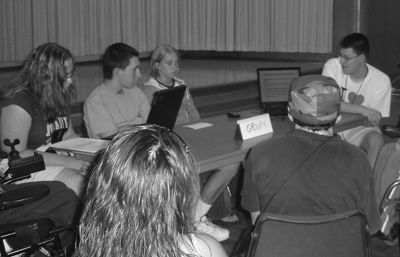 We had opportunities to see some accessibility issues with specific websites. For example, some titles looked like headings but were not. When using Home Page Reader™ that meant we couldn't "skim" the page. After we added the proper html code, we were able to "skim" by navigating through the headings. We wrote a report describing accessibility issues and suggested repairs for each one. There are some straightforward fixes that can easily make sites more accessible. We presented our findings to the managers of a website and they seemed very willing to take our suggestions back to the company.

On Monday, August 1, 2005, a caravan consisting of three power chairs, three walkers, one hitchhiker, two dogs, and a skitcher headed off at 8:45a.m. to the Paul G. Allen Center for Computer Science and Engineering on the UW Seattle campus for a week full of pictures and math. The common bond between us, besides sharing a disability, was that we were heading off to the DO-IT Summer Study "Game of Life" workshop, headed by UW professor, Dr. Richard Ladner. We kicked the week off by getting kicked out (we were so psyched about the Game of Life that we arrived too early!). After five minutes we were let back in and started our orientation, which consisted of demos in the Game of Life program.

Each student was assigned a UW Computer Science student to work with for three hours a day, every day, for the entire week. We studied and implemented a variety of image processing algorithms and different behaviors of cellular automata (cellular movement). Every one of us wrote code in Java! All but one of us hadn't written code at all before that week. All in all, the Game of Life workshop was filled a lot of imagination and determination.