Summer Study '05: What Do the Phase I Scholars Do?

DO-IT Phase I Scholars participate in a two-week, live-in Summer Study session on the University of Washington campus in Seattle, Washington. They learn about college life; surf the Internet; interact with peers, staff, and mentors; and have fun. Below, '05 Phase I Scholars share some of their experiences. Articles by previous Phase I Scholars can be found in earlier newsletters at www.washington.edu/doit/news/do-it-news.

Interns: Give a Helping Hand

by Phase I Scholars, Daren and Hunter

On our way to DO-IT Summer Study, those of us who were Phase I Scholars did not know what to expect. We were nervous and unsure. Right away when we arrived, the interns made us feel welcome. They showed us to our rooms, talked with us and introduced us to other people in the program. This made it easier for us to get comfortable. The interns also helped the Phase I Scholars get to know the University of Washington campus. We followed the interns around as we went to dinner and to classes. Eventually, we got used to the campus and didn't need the interns all the time when moving throughout the area.

Without the help of the DO-IT interns at the beginning of Summer Study, we would have been lost. Help from the interns taught us how we can help Phase I Scholars when we are interns!

Get to the Heart of It 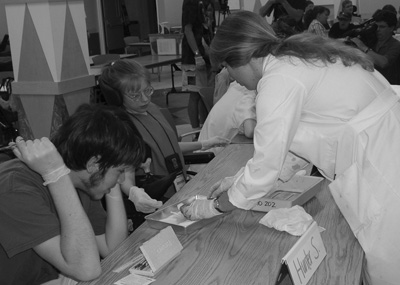 Phase I DO-IT Scholars participate in the heart dissection lab

by Phase I Scholars, Jennifer and Kayla B.

Our group of Phase I Scholars got to the UW and got busy. We opened the Summer Study program by diving right in and dissecting a heart. Some were squeamish but most were excited. This aspect of biology is creepy to some students. Fascinating, definitely, in fact biology was the best of the four science classes we were involved in, but it is also, not by coincidence, the creepiest. The hearts we worked on belonged to pigs from a slaughterhouse; instead of wasting them, we used the hearts to better understand the cardiovascular system. You might wonder, how would this activity affect students with disabilities?

People with learning disabilities had little problem with this session. However, there were some challenges involved in dissecting the heart for people who had mobility impairments that affected their hand motion. Thankfully, everyone had a partner to work with. We all gave the dissection our best shot. We took scissors, as in regular cutting scissors, and cut open a vital organ! Gah! What a great experience. Not everyday do you have an opportunity to see a heart and work on it.

This session also gave all of us a hint of what life science is all about. Who knows, maybe there is a future heart surgeon among us or others of us who are now more certain that we will stick to computer programming. Either way it got some of us out of our boxes and comfort zones. And you know what? It worked, and that's a good thing because trying new things will help all of us in the long run. So thank you DO-IT for this experience.

by Phase I Scholars, Shavonne and Dulce

Lights, camera, laser! That's right, we said laser not action and that's just what we're writing about - the fantastic laser show at the Pacific Science Center. This trip took us to explore the world of science in a variety of ways, but the highlight was the laser show which took place to the smooth melodies of such Motown groups as the Temptations, Supremes, and The Jackson 5.

So what's a laser show like you ask? Picture a huge open room with nothing but a slanting carpet floor that everyone lies on to get a better view of the show above them. Once everyone finds their spot all the lights shut off and the room goes pitch black, perfect for the lasers to begin their work. The music, which this time was a Motown theme, starts, and then on come the lasers and the fun! For our show they started with some basic monochrome lasers that bent and twisted in various ways; then things got a bit more creative with more colors and more tricky twisting of the lasers. The show reached its pinnacle when they did something resembling a laser music video to the Jackson 5's song, ABC. This was really cool and probably took a long time to create just right to fit the room. The laser show was definitely the highlight of the Pacific Science Center trip!

Risk-Taking at the Pacific Science Center

by Phase I Scholars, Eli and Jesse

On Saturday July 31st the Phase I Scholars went to the Pacific Science Center. One of the more interesting exhibits was about risk; specifically, the probabilities involved in risk. In this exhibit, you could play a mock game show for fictitious prizes, lie down on a bed of nails, and try to find a single black bead among a million other colors of beads. Tying in with this theme was the IMAX movie we saw: Adrenaline Rush: the Science of Risk. As the name implies, it is a movie about the risks some people will take just to get a good adrenaline rush, though it focused primarily on sky-diving and base-jumping.

As far as accessibility was concerned, there weren't many problems for people with learning disabilities. However, some of the exhibits where sound (or sight) is required were inaccessible for people who are deaf (or blind) and need to be altered to accommodate them.

The Value of Technology

by Phase I Scholar, Daman

Technology levels the playing field for people with disabilities, from education to careers to social opportunities. Starting early in elementary school, technology has been a vital tool in my life. I have used a laptop since second or third grade to complete homework assignments and for entertainment. I will show you how technology has changed my life and how it can change yours.

In my early years, I just typed in Microsoft Word. At this time technology was still evolving and I had a laptop that had Windows 3.1! My early start with technology changed my life forever. By fourth grade I could do some customization of the computer. I was doing all my homework on the computer and starting to communicate by e-mail at this point. Whenever I did an oral presentation, I would make a PowerPoint presentation. One thing that helped me greatly was my teachers. In fourth grade, my teacher had us in the computer lab first thing everyday. Then, in fifth and sixth grade, I was in a multi-age class and one of my teachers was in a computer training program, which opened up a wealth of information.

By junior high I had a lot of knowledge about computers. I could do more than most kids my age. Halfway though my seventh grade year, I started a year-long high school computer maintenance class. Being the youngest in the class, I still managed to get an A-. By the end of that class, I had some advanced computer skills. In eighth grade, I took CADD, Computer Aided Drafting and Design. This class gave me some skills for my primary career interest, being an architect.

In ninth grade, I took three computer classes. First, I took a college level class, Cisco Academy, which is a computer networking class. Second, I took two classes in one period, Web Design and Maintenance, and Computer Applications. Web Design taught me a ton about the Internet and how to manage a large website. I became the school's Assistant Webmaster and had access to the web server. In my Computer Applications class, I received three Microsoft Office User Specialist Certifications: Microsoft Word, PowerPoint, and Excel. Also, that year, I received an Information Technology Award. In tenth grade, I took Store Management to learn about E-Commerce.

DO-IT has furthered my experiences with technology. DO-IT gave me access to the assistive technology I need. Also, it has given me the opportunity to help others with similar interests and to network with them. I think this is a wonderful program!

Where did all this training get me?

Last year, I was the Webmaster at my school. I also became the Student Manager of the Athletic Department, where I updated the sports websites daily, and I received my varsity letter. I also competed in DECA, an association of marketing students by creating an E-Commerce Business Management Plan, which placed 11th at state.

I also create personal, professional, and non-profit websites, including United Cerebral Palsy's (UCP) regional website. I have the opportunity to help others with technology, just like I was helped. I'm starting to speak at events, sharing the vital message that people with disabilities are no different than anyone else. I work with UCP, DO-IT, and local organizations to find places to speak. Maybe someday all people will look at others equally.

Overall, technology is vital for everyone, but especially people with disabilities. We need to know how to use technology to succeed in today's society. By getting started early, we can have the time to get the training and experience to succeed, not only in careers, but in education and social opportunities. If you start early working with technology, you will be able to get anywhere you want in your life. I hope you all have the opportunity to integrate technology into your life and/or someone else's life.