Studying BCIs at the CNT 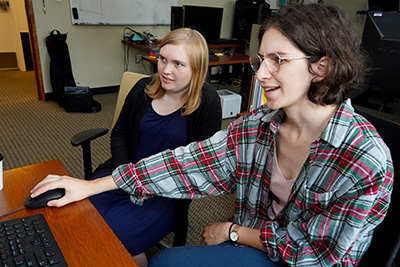 Anna (left) working with her mentor on analyzing the data. Photo by Marcus Donner, Center for Neurotechnology.

Brain-computer interfaces (BCIs) have a promising ability to enhance our future as a society. BCIs are capable of so much, such as being able to control a robotic arm with just a person’s mind. To do this, the BCI must decode a user’s intent and then provide information back to the user, which is actually extremely difficult to accomplish.

One-way neurotechnologists at the Center for Neurotechnology (CNT) are investigating this task is through stimulating over the somatosensory cortex of the brain to provide tactile feedback to the user. This could be useful if the user wanted to know what position the robotic arm was in, or how tightly it was gripping an object, in order to adjust to accomplish a specific task. Neurotechnologists are exploring the optimal time to stimulate the brain to provide tactile feedback. Through examining data, it has been suggested that normal touch is most easily detected when the brain’s alpha waves are in part of the cycle called the “trough” phase.

I used this information in my own experiment to determine if the same was true for sensorimotor direct cortex stimulation. Just like how songs are made up of many sound waves or frequencies, neural signals are also made up of different waves, and the ones we are interested in, the alpha waves, have a frequency of between around 8 to 12 hertz.

After all the data was collected, I then created a 3-D array of the desired information, which allowed us to extract the phase of the alpha wave at the beginning of the stimulation for each trial, which we then plotted on separate polar histograms in order to see if there was any correlation between the subjects’ responses and the phase of their alpha waves.

After running the polar histograms of the alpha wave phase for yes vs no responses through a nonuniformity test, it was concluded that there were no real clusters in the data, and therefore we cannot definitively prove or disprove our hypothesis from these results. This outcome was not what we expected, since previous research has shown that perception of normal touch seems to have a dependency on the brain’s alpha waves being in the trough phase. To confirm any other conclusions we may have, more data would need to be collected. This might entail analyzing each electrode separately or separating different trials by voltage amplitude, both of which were not done in our experiment. However, this experiment brought to light many options to continue to study, bringing to light that the process may be completely different than normal tactile sensations. Further proving this new idea may help us better understand how to utilize artificial sensation to improve brain-computer interfaces in the future.

As for how this experience has influenced my future as a college freshman, it has helped me understand how interconnected the subjects of computer science and neuroscience are. This summer I learned a new coding language and analyzed neural data, both of which were extremely interesting and rewarding. I also spent time at DO-IT Summer Study, where I could live independently in a dorm. I have complete confidence that I will have no problem going to college across the country. Overall the experience was invaluable; I am now more prepared for life at college and better understand how my computer science and neuroscience are deeply intertwined.