Progress of DO-IT Participants Toward College and Careers

DO-IT has encouraged participation in STEM fields with funding from the National Science Foundation (NSF). DO-IT's latest NSF-funded projects are AccessSTEM and AccessComputing. The goal of AccessSTEM is to increase the number of individuals with disabilities who have degrees and careers in STEM. AccessComputing focuses more specifically on computing fields and employment.

The AccessSTEM/AccessComputing/DO-IT Longitudinal Transition Study (ALTS) explores college and career outcomes for students with disabilities who have participated in DO-IT activities that were at least partially funded by NSF. Current results can be found at www.uw.edu/doit/Stem/tracking4.html. This report summarizes DO-IT interventions and selected results of the ALTS.

The ALTS measures progress toward degrees and careers of students with disabilities who had a goal of postsecondary education while in high school and received DO-IT-sponsored interventions (e.g., internships, mentoring, college transition activities).

The ongoing study is designed so that participant responses can be updated and data can be analyzed at any time. Recognizing that some respondents in the study are still enrolled in secondary school or are recent high school graduates, the researchers track the status of respondents as they progress through critical junctures that lead to degrees and careers (Figure 1). The ALTS Logic Model (Figure 2) provides a visual representation of DO-IT activities in which respondents were involved, as well as project outputs, goals, outcomes, and long-term impacts.

As of February 2011, ALTS included a total of 294 respondents with disabilities that affect:

Participants and staff rated the value of all interventions highly for promoting college and career success.

An overwhelming majority (95%) of ALTS high school graduates attended a two- or four-year college, of which 95% attended within two years from high school graduation. This outcome suggests the positive impact of DO-IT interventions when compared to the NLTS participants of which 31% took a postsecondary course within two years after high school. This finding is not surprising to DO-IT staff who consider the ongoing program supports, as noted in DO-IT's critical junctures model (Figure 1), essential for many students with disabilities to transition successfully to and succeed in college and careers.

Perhaps DO-IT's greatest impact on the number of STEM degrees earned by students with disabilities results from interventions that increase degree attainment overall. The total number of STEM degrees is likely larger than what it would be otherwise due to the increased pool of college graduates with disabilities as a result of these interventions. Data should be analyzed in light of the fact that DO-IT recruits students with disabilities who are not necessarily initially interested in STEM, as noted in the "Earlier Research Results Regarding DO-IT Interventions" section of this publication. Data suggest that DO-IT interventions increase the overall perception of career options of participants, particularly girls, and the interest in STEM of those not initially interested in STEM.

Seventy-three ALTS respondents were recorded as currently "employed" in positions. Forty (40%) percent of these positions were STEM-oriented or in fields with significant technology demands. Among those not still enrolled in college, seventy (70%) percent of those who partipated in extracurricular STEM organizations and activities were employed, asignificantly higher percentage than the percentage of those who did not (44%). Among those still enrolled in college, 21% of those in extracurricular STEM activities are employed, as are 15% of those who are not involved in similar activities.

Many participants who pursued non-STEM careers (e.g., accounting, law, education, journalism) benefited from the STEM knowledge and encouragement they gained through DO-IT activities. Their positive responses to ALTS questions about the value of DO-IT interventions suggest that these activities supported the NSF goal of expanding the STEM literacy of all citizens. For example, participants who were encouraged to take mathematics courses as a result of DO-IT activities are prepared to pursue math-intensive careers such as accounting. Participants who became teachers are now in positions to encourage other young people with disabilities to consider STEM careers. Those who have become attorneys and other professionals serve as role models to young people with disabilities, helping them consider career options that they previously thought were unattainable.

The DO-IT Scholars program, originally funded in 1992 by NSF and now funded by the State of Washington, supports transitions from high school to college and careers for students with disabilities. DO-IT Scholars are college-bound high school students who face significant challenges in pursuing postsecondary studies and careers as a result of their disabilities. They are not necessarily initially interested in STEM fields, but program activities include those designed to increase interest and knowledge in STEM. By providing an on-campus summer study, year-round peer and mentor support, and work-based learning experiences, DO-IT helps these students develop self-determination, social, academic, technology, career, and employment skills and successfully transition to adulthood.

A rich body of evaluation and research data has been collected on this program. It includes reports from Scholars, parents, and mentors and analyzes the perceived value of program interventions and participant differences with respect to gender, disability, and STEM interest. Some of the results are summarized at www.uw.edu/doit/Stem/tracking4.html. Highlights include the following:

The content of this publication was taken with permission from Report of the AccessSTEM/AccessComputing> DO-IT Longitudinal Transition Study (ALTS) at www.uw.edu/doit/Stem/tracking3.html. The DO-IT Scholars program, in which many study respondents participated, has been primarily funded by the National Science Foundation (grant #9255803, 9550003, and 9800324) and the State of Washington since 1992.

The AccessSTEM/DO-IT Longitudinal Transition Study (ALTS) is supported by the National Science Foundation (award #HRD-0227995, HRD-0833504 in RDE, and CNS-0540615 and CNS-0837508 in CISE). Any opinions, findings, and conclusions or recommendations expressed in this material are those of the authors and do not necessarily reflect the views of the National Science Foundation. 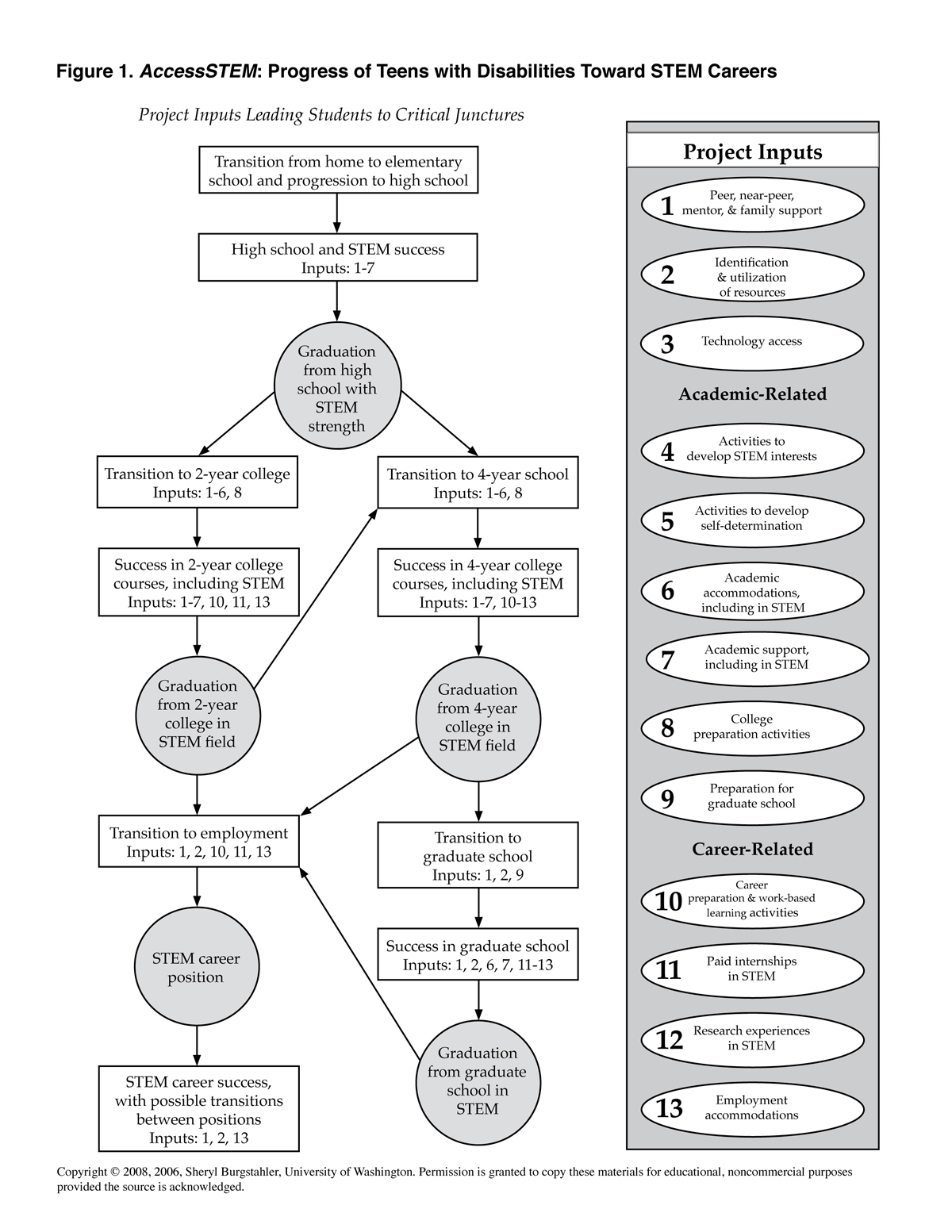 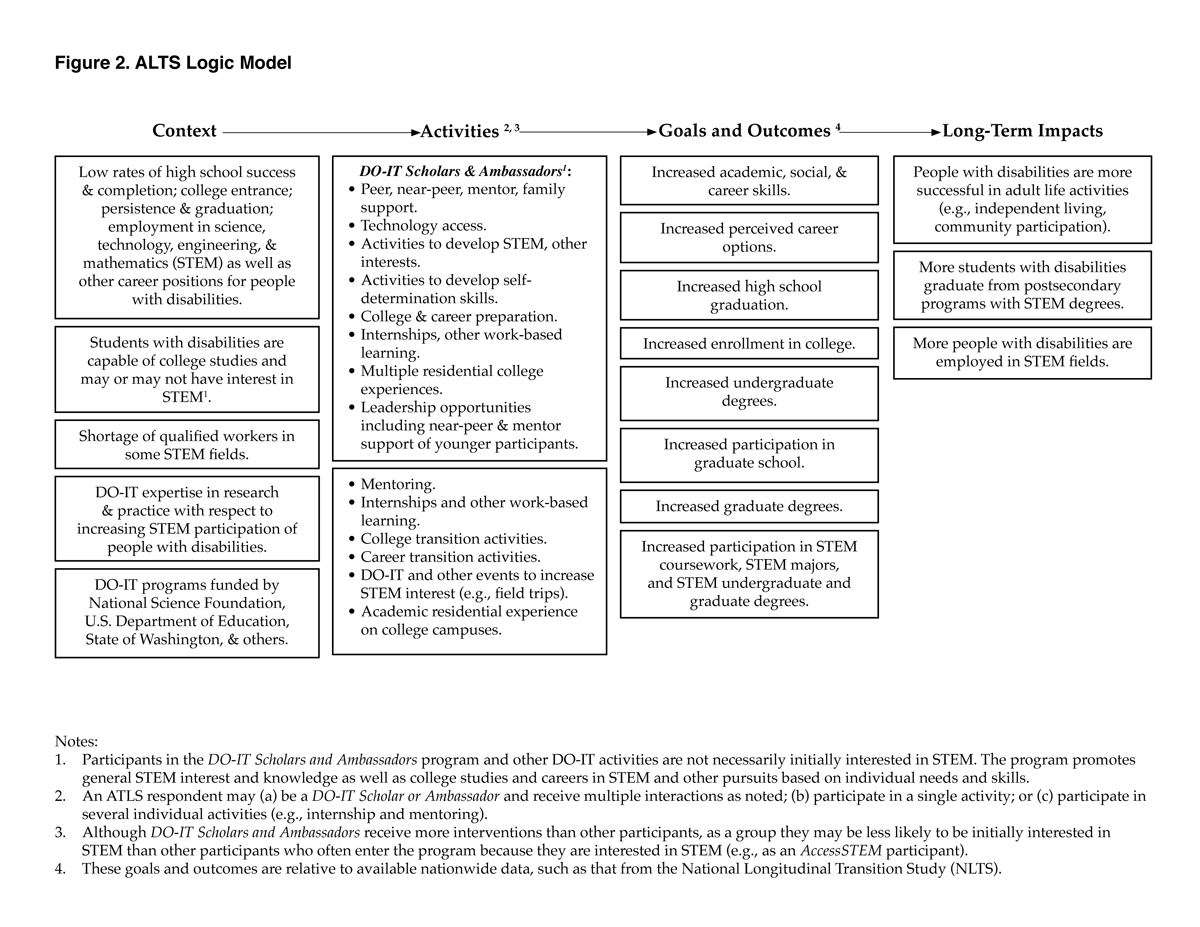 DO-IT (Disabilities, Opportunities, Internetworking, and Technology) serves to increase the successful participation of individuals with disabilities in challenging academic programs such as those in science, engineering, mathematics, and technology. Primary funding for DO-IT is provided by the National Science Foundation, the State of Washington, and the U.S. Department of Education. DO-IT is a collaboration of UW Information Technology and the Colleges of Engineering and Education at the University of Washington.

Grants and gifts fund DO-IT publications, videos, and programs to support the academic and career success of people with disabilities. Contribute today by sending a check to DO-IT, Box 354842, University of Washington, Seattle, WA 98195-4842.

To order free publications or newsletters use the DO-IT Publications Order Form; to order videos and training materials use the Videos, Books and Comprehensive Training Materials Order Form.

For further information, to be placed on the DO-IT mailing list, request materials in an alternate format, or to make comments or suggestions about DO-IT publications or web pages contact:

Copyright © 2012, 2010, 2009, 2008, University of Washington. Permission is granted to copy these materials for educational, noncommercial purposes provided the source is acknowledged.