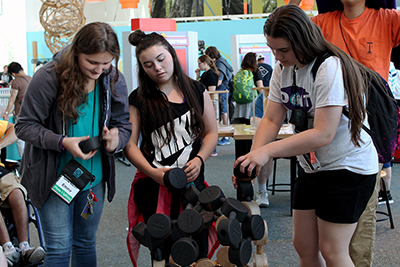 The first thing that we did after we entered the Pacific Science Center was visit the Boeing IMAX Theater. There was no problem entering the theater and there was plenty of accessible seating. We watched the movie Dream Big, which was based around engineering and showed us how all things come from simple ideas, and that any one of us could be the one who has the next big idea.

After watching the movie we had lunch outside and then were able to explore the rest of the museum. It is packed full of awesome exhibits on everything from space to dinosaurs.

The last thing we did at the Pacific Science Center was watch a Michael Jackson laser show. No one had any trouble accessing the laser dome or enjoying the show. It was awesome watching the show and listening to the music either reclined in a chair or lying on the floor. The show was a lot of fun and very relaxing. Visiting the Science Center was one of my favorite events during Summer Study.

‹ The Eventful First Night up Visiting Microsoft ›
Back to Top