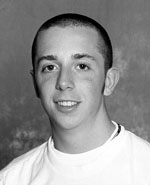 Getting Ready for DO-IT Summer Study
There are several things that must happen before the Summer Study begins. Phase I Scholars are outfitted with a computer and other adaptive technology that they need for efficient use of the computer because of their disabilities. The computer and its components arrive either before or with Doug Hayman or Dan Comden, the self-named "head technical nerds for DO-IT," who visit each Scholar's home. They assist in setting up the computer and explaining the methodology of establishing an electronic link to the Internetworking computer world. All Scholars are given assistance setting up an e-mail account they can use to communicate with the larger group of Scholars. This link to a much larger world also allows use of the Internet to gather information and to expand the experiences that the Scholars are exposed to from their own homes.

After one has received his or her computer and is linked to the world of e-mail and the Internet, all that is left is to go to Seattle and participate in the Summer Study. The transit from home to Seattle can be one of the most enjoyable experiences. It gives one a sense of independence when the voyage is made alone, traveling across the country or just across town to get to the University of Washington. It also forces one to think for himself or herself since there is not anyone else around to make the decisions.

When the week finally begins the Scholars are introduced to a series of classes and lectures, all dealing with different topics in the various fields of science and engineering. Others show how the skills that are learned in high school are applied in these fields. A more in-depth look into the world of the Internet is also explored during Summer Study.

There is ample opportunity for computer work during the open computer labs that are provided throughout the day. In these labs Scholars can check their e-mail, surf the Net, and work on assignments. Activities planned for the Scholars show that college is not just books and numbers, but some leisure is involved in the overall college experience. Scholars are expected to find or build small groups of peers for leisure activities and just hanging out. These groups provide a means for escape and just messing around throughout the week.

Before everyone leaves, a closing ceremony is held. The Phase II Scholars give their reports on the group projects they participated in and certificates are handed out. After the ceremony is over the participants are left to say their good-byes to all who were involved in the Summer Study. Leaving Seattle can be one of the hardest things to do for several reasons. First, your dorm room has managed to look like your room at home, and you have no clue how you are going to be able to pack everything in your bags. Second, the experience was so enjoyable that one would not wish to leave and continue his or her life before Summer Study.

After Summer Study, the Phase I Scholars complete a project before the next Summer Study. The project involves the individual's mathematics, science, engineering, and technology-related interests and/or a disability-related topic. E-mail communications are ongoing. Scholars are also encouraged to reach their highest potential in school to allow for many possibilities to be open to them when they leave high school.

What I have gained from DO-IT
DO-IT has been a worthwhile experience for me because it reinforced the ideas I had about college and about how to get through school with my learning disability.

Working for four years at an Easter Seals day camp and growing up with a sister with down syndrome have taught me a lot about interacting with individuals with disabilities, but being in the DO-IT program taught me how to confidently work with individuals who have physical disabilities or other disabilities that do not affect their intelligence. At first I was afraid to approach physically disabled participants in the program because I had never been around people like them. After a period of time and being forced to interact with them, I no longer had this fear. I could see that they were no different than I was. A lot of the participants were able to find humorous aspects in their disabilities. For example, Justin, who is blind, would say. "I can't see the TV. Can you move it closer?" I found it humorous when I woke up early in the morning to go running and was trying to be quiet, not to make any noise to wake up my deaf roommate.

DO-IT also allows for a feeling of independence. I felt exuberant when flying from the middle of Pennsylvania to Seattle, Washington, alone. This sudden independence allowed me to feel more responsible for myself. When I got to Seattle, I still was independent and responsible for my actions. At my first Summer Study, I lost my room key. I had to find a way to replace the key, but I didn't have enough money for the replacement fee. I had to call home to ask for money to be sent to the program director.

DO-IT also tries to teach participants to think for themselves by having them work by themselves and in small group activities. DO-IT did not provide answers for the problems that went along with the activities; we had to develop the answers. For my first Summer Study, we were put in small groups and each group was handed an identical cube with names and numbers on the different faces. One face was covered up, and we had to figure out what was on that face.

The DO-IT program introduces participants to many science fields during the Summer Study. Exploring these science fields helps participants know whether or not they are interested in a particular field of study. It helped me narrow down my choices of study for when I enter college. For example, during my first Summer Study we went to a lecture by a professor of astrophysics. I found that interesting because he talked about studying stars and other heavenly bodies, something I have always liked but never knew they called it astrophysics.

DO-IT gives its participants confidence to be self-advocates, so when they are off by themselves or away at college they will be able to state their disabilities and what it is that they need to help them work around them. Being in the program has helped me to understand the need to be a self-advocate for myself to make sure that I receive all of the accommodations that I need to work around my learning disability. The fall after my first Summer Study I went up to all of my teachers on the first day of school and stated that I have a learning disability. I told them of the accommodations that I would like and asked whether or not that would affect their classes.

At Summer Study, participants are shown what college life could be like first hand by staying in residence halls, going to labs and lectures on the campus, and eating in the dining halls with college students. This opportunity was great for me because it got me away from home and into a college environment.

DO-IT has shown me that I can accomplish things that I thought I could not do. The program taught me how to cope with my learning disability in an educational environment and made it seem easier to do work that I normally found difficult.

‹ Director's Digressions up Summer Study '99: What Did the Phase I Scholars Do? ›
Back to Top