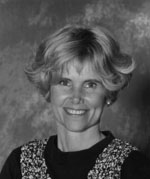 In August we finished our seventh annual DO-IT Summer Study program for high school students with disabilities. Twenty new DO-IT Scholars were funded by the State of Washington. One Scholar from Oregon was funded by the Samuel S. Johnson Foundation.

Let me introduce you to the '99 Phase I Scholars.

Roy, who has Duchenne muscular dystrophy, hails from Hoquiam and is interested in history, math, and computers. As a freshman, he designed a wheelchair ramp which was later built by his school. He is an Eagle Scout, a member of the Honor Society, and a World Class Scholar. "I enjoy learning new things and meeting different people."

Mi Mi's favorite class is science because "it relates to the outside world." To further her goal of becoming an environmental specialist, Mi Mi worked as an assistant for the Department of Natural Resources, Geological Division, last year. Mi Mi has dyslexia and, through DO-IT, has enjoyed meeting other teens with disabilities who are willing to "reach farther for their education."

Crystal is active in 4-H and the Future Farmers of America. She has received a 4-H Achievement Award and a Certificate of Excellence in Computer Service and has completed her Teacher Assistant Inservice Training. Crystal, who has speech and mobility impairments, wants to become a physical therapist. "I feel I can help other kids to make their dreams come true, like my coaches and family made mine come true."

Danielle is an experienced computer user who came to us from Cashmere. Danielle, whose disability is the result of childhood cancer, says English is her favorite subject. "I would like to find out what opportunities are out there for me."

David lives in Seattle and loves math and games, particularly Backgammon. During Summer Study, David enjoyed meeting other people who have disabilities, exchanging ideas, and playing board games.

Oscar, from Yakima, is interested in science and computers. Oscar, whose disability affects mobility, is preparing to go on to college once he graduates from high school. "It doesn't matter how big the disability is, you can do whatever you want in life as long as you try."

Joel is interested in "how things interact together and why they work the way they do." He enjoys being challenged academically and would like to get his degree in a science or engineering field. Joel, who has dyslexia, is a member of the Honor Society. He came to us from Grandview.

J.W., from Moses Lake, is interested in art and computers and would like to pursue a career in computer-aided drafting or video game programming. Recognizing that Duchenne muscular dystrophy slows him down in some ways but not in others, J.W. says "I am limited to what I can do physically, but not mentally."

Patrick hails from Spokane and is interested in math and psychology. Patrick, who has a specific learning disability, has his sights set on graduating from college and possibly becoming a family therapist. He enjoys helping people.

Brandon, who has a hearing impairment, says, "I love to build things with my mind, and watch them be created for real." From Kettle Falls, he won a Northeast Washington All-Conference Academic Award.

Ryan hails from Aberdeen and is fascinated by airplanes. He would like to become an aerospace/aeronautical engineer and learn how to design better air and space craft. He is active in both 4-H and the Indian Education Committee. Ryan, who has a learning disability, says "It is nice to see other people out there with the same problem and know it's not just me."

Zachary is from Vashon Island and is interested in math and computers. He has Freeman-Sheldon syndrome. Zach loves to surf the 'Net and learns new computer programs quickly. He helps his mom with her new iMac and is on his way to becoming the family computer expert.

Stuart was born in Bulgaria and now lives on Vashon Island. He has Larsen's syndrome, which causes bone abnormalities. Stuart is interested in learning more about computers and science and is considering a career in computers. He enjoys corresponding with other people with disabilities.

Lacey hails from Seattle and has plans to pursue a career in adaptive computer technology or science research. She has cerebral palsy. "Lots of people don't think that disabled people (especially girls) can be good at math and science, but I am and I think the DO-IT program can help me have a better chance in the world."

Wolfgang's interests "lie in the direction of physics...I am constantly contemplating the state of my natural surroundings." He hopes to become a physicist and a writer. Wolfgang also enjoys surfing the 'Net and communicating via e-mail. Wolfgang, who is from Mount Vernon, has dyslexia and ADD. "I have little doubt that the DO-IT program will not only help me in finding a college but also give me the tools to make my college experience worthwhile."

Kelci came to us from Lind. She is interested in the areas of social service, health, and education and plans to go to a two-year college and then transfer to a university. Kelci has cerebral palsy. "Everyone has learned ways to cope with their disabilities and we can all learn from each other."

Tynesha is from Seattle. When she isn't helping run her school's store, Tynesha, who has spina bifida, enjoys acting and working as the school nurse's aide. Her ambitions include going to college and majoring in business management or theater.

Ali, from Lynnwood, enjoys science and likes to know "how things work." His career goal is to be a computer engineer, but he is also considering careers in law and architecture. Ali speaks three languages (Kurdish, Arabic, and English ) and just started learning Turkish. Osteogenesis imperfecta causes his bones to be brittle.

Kathy hails from Tacoma and enjoys Spanish and music courses. She is considering careers in nursing and sociology. Kathy has spina bifida, but it "doesn't affect my learning."

Nate is from Federal Way and is looking forward to going to college. He enjoys meeting people his own age who have disabilities. "If they have great obstacles to overcome it inspires me." Nate has low vision.

Buffy is very interested in math and science and loves to figure things out. She is from Oregon City, Oregon, and wants to play professional basketball, then teach math or science someday. Buffy is deaf. Her advice to other kids with disabilities is, "a lot of kids have struggles and obstacles in their lives and they are considering giving up. I would tell them, never ever give up!"