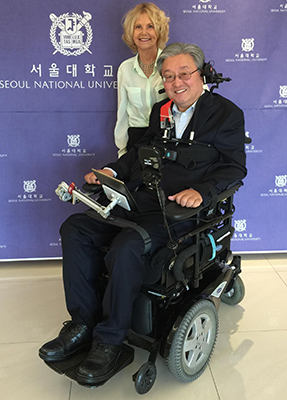 DO-IT Director Sheryl Burgstahler and Professor Sang-Mook Lee discuss ways that we can work together to improve the lives of people with disabilities.

While in Korea, I also met with Dr. Sang-Mook Lee, a geology and oceanography Professor at Seoul National University (www.pbs.org/wgbh/nova/earth/lee-oceanography.html) and long-time collaborator with DO-IT. We discussed similarities and differences in our countries with respect to the education and employment of people with disabilities as well as further engagements between our countries in this regard. DO-IT hopes that we can help open a DO-IT program in South Korea to further people with disabilities in the country. 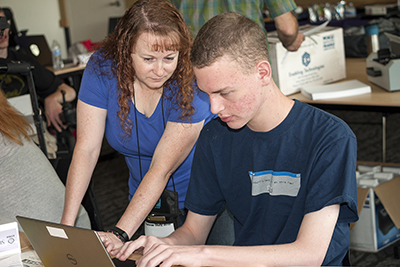 AccessComputing works to ensure that students with disabilities can be successful in computing education and careers.

NSF approved an additional investment of almost $4,000,000 in the Alliance for Access to Computing Careers (AccessComputing), a project that they have funded continuously for a decade, with a total investment of more than $8,000,000. With new funding, AccessComputing continues its work increasing the number and success of people with disabilities in computing degree programs and careers and work to increase the capacity of postsecondary institutions and other organizations to fully include students with disabilities in computing courses and programs.

A diverse set of postsecondary institutions and computing organizations are AccessComputing partners and students with disabilities engage in mentoring and professional development opportunities. A new group of industry affiliates is being formed, bringing greater focus on placing students with disabilities into computing careers after successfully completing their education. A new activity explores how to integrate disability, accessibility, and universal design topics into computing curricula. 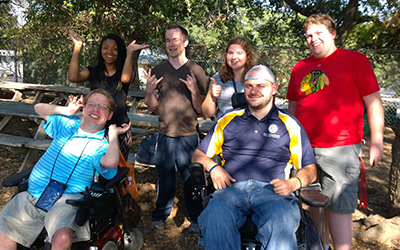 I recently went to the US Business Leadership Network (USBLN) conference in Austin, Texas. About 750 people attended to network and discuss the inclusion of disability as well as diversity in the workforce. This included a number of Fortune 500 companies, including Northrup Grumman, Microsoft, EY, Lowe’s, AT&T, Wells Fargo, and many more.

The student pre-conference focused on how to best prepare for getting a job. We attended sessions hosted by employers and the Mistubishi Electric America Foundation (MEAF) about networking, how to have a good interview, and how to make a good impression. MEAF also provided the opportunity to participate in an Innovation Lab, where we were put into small teams to create a plan to fill in the gap in the workforce that people with disabilities may face. It was challenging but fun to learn the different perspectives people brought to the table.

This school year, I am a part of the Student Advisory Council (SAC), which is composed of 10 people with disabilities across the nation. We were mentors at the conference to those who needed assistance, and we helped people learn about topics and issues from the perspective of a person with a disability. We also got in touch with our local BLNs about what we could do around our state to ensure that people with disabilities are getting what they need to be successful in challenging careers. Being a part of SAC is a great opportunity because I can see what companies have done so far to include people with disabilities in their workforce and what could still be done. It also gives me the opportunity to meet people with different experiences in finding a job and being in the workforce.

Overall, the conference goal was to pull people together from all over the world and give them a chance to share what their companies have done to increase accessibility for people with disabilities. The conference gave them a chance to reflect on what they have done and network with others to see what they could do more to enhance the workforce as well as enhance customer service. 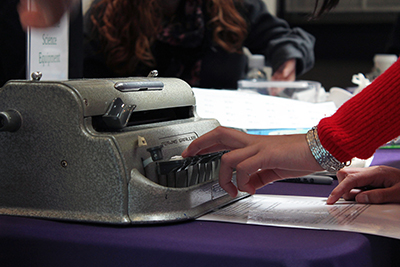 DO-IT is always looking for opportunities to interact with students and faculty to seek out individuals who benefit from our programs. Whether it is on a college or high school campus or at a community career fair, we try to make connections and network. We often showcase our accessible science equipment where we demonstrate assistive technologies and tools to make the science classroom more accessible to people with disabilities. Other times we partner with the Access Technology Center (ATC) to display adaptive computer equipment. Through these demonstrations we have conversations with attendees about the importance of universal design and how we can provide resources to instructors and students with disabilities.

In October, two DO-IT staff members hosted a booth at the University of Washington Information Technology (UW-IT) Tech Expo. It took place during the first week of fall quarter, so many freshmen were looking for resources for their first year at UW. Beginning college on a new campus can be overwhelming even for the most prepared student, so reaching out to them at this critical time is important. Students with disabilities have even more on their plate and DO-IT aims to be as visible as possible. Many students took applications and played with accessible science equipment. This is just one example of the many events that we participate throughout the year and is always a highlight for DO-IT staff to participate in. 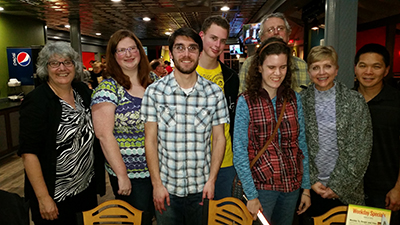 Once a quarter, DO-IT hosts a networking event in Seattle, inviting all of their participants to reconnect in person and meet new Scholars, Mentors, Ambassadors, and staff. Parents and family of Scholars are also invited. DO-IT also often hosts a concurrent gathering in Spokane, including those on the east side of the state who couldn’t otherwise make it to Seattle. We also ask participants if there is any interest in hosting an event in other areas; this fall, multiple requests came from Southwest Washington, resulting in a networking event held in Vancouver, WA.

Ten people (participants and their families) came to the event in October. Scholars from the same area had a chance to meet one another and make local connections. Most of these Scholars had never had the opportunity to meet each other, even though they lived in the same area. It offered a great opportunity for a 1999 Ambassador to meet a 2015 Scholar.

While we had pizza, Scholars discussed their interests and hobbies and made plans to get together again, both with and without a DO-IT sponsored event. They all hoped to have another networking event in the winter.

‹ DO-IT Community Outreach up Quorum Included in Hour of Code › 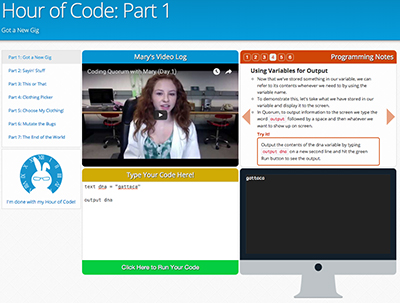 All students, including those who are blind, can learn to program using Quorum.

For the second year, students participating in code.org’s Hour of Code can choose an accessible tutorial with a programming language called Quorum. The tutorial works with screenreaders and is accessible for participants with visual impairments. 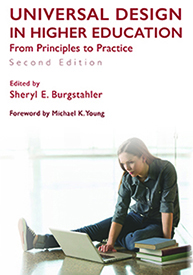 DO-IT is excited to announce the publication of Universal Design in Higher Education: From Principles to Practice, edited by DO-IT Director Sheryl Burgstahler. After thorough revision and the addition of new articles, this second edition addresses recent changes in law, technology, and university policy, making it a fully comprehensive guide for creating inclusive college and university programs.

Universal Design in Higher Education: From Principles to Practice showcases practices for creating a campus environment that is welcoming, accessible, and usable. As more students with disabilities attend postsecondary educational institutions, universal design becomes a practical approach for educators to fully include these students.

To learn more about the book or order it online, visit the Harvard Publishing website. To receive a promotional 20% off, see our special promotional flyer, available until January 2016.

As Stephan Smith, executive director of the Association on Higher Education And Disability, said: “Fresh, comprehensive, and engaging, Universal Design in Higher Education is expertly written, thoughtfully crafted, and a ‘must-add’ to your resource collection.”

‹ Quorum Included in Hour of Code up About DO-IT ›

DO-IT (Disabilities, Opportunities, Internetworking, and Technology) serves to increase the successful participation of individuals with disabilities in challenging academic programs and careers, such as those in science, engineering, mathematics, and technology. Primary funding for DO-IT is provided by the National Science Foundation, the State of Washington, and the U.S. Department of Education.

For further information, to be placed on the DO-IT mailing list, request this newsletter or other materials in an alternate format, or make comments or suggestions about DO-IT publications or web pages, contact us at

Below are the articles of the DO-IT News December 2015 newsletter. These articles can also be seen all on one page at the Full Newsletter option.

To see other newsletters in the full format, visit DO-IT News (All Articles) List.