Phase II Scholars Anna, Jordan, Tycho, Myles, and Alex attended a neurobiology workshop led by professor Martha Bosma and UW students Hiro, Kelly, Jesse, Kirsten, and Chris. The Interns who attended the workshop were Teresa, Jarrod, and Cameron. In this workshop, there were two separate projects: one was the stimulation of a cockroach leg and the other was the dissection and physiological experimentation of embryonic mouse hearts.

Tycho, Jordan, and Anna worked in the cockroach lab. Hiro taught them about the basic structure of a neuron, the various responses, and the concept of action potentials. He covered depolarization and polarization and when it changes. The Scholars tested electrical stimulation with and against the grain of the cockroach leg, listening for variations in sound and recording the differences in variables, including the positioning of the legs and whether music was being played. They discovered that the cockroach leg was more active when lively music was played compared to slower music. They also concluded that more electrical feedback occurs when the leg was stimulated against the grain. Scholar Anna reported that her favorite thing she learned was about pain sensation and how neurons can rapidly wear out (known as “accommodation”). 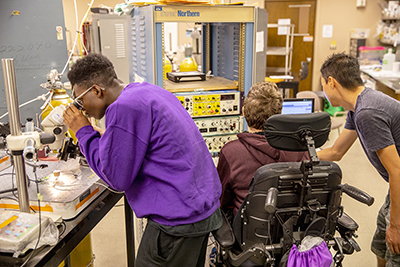 In the second group, Myles and Alex began the embryonic mouse heart lab led by Martha Bosma. Mouse embryo hearts are about the size of a pin on a needle. On day one, the hearts were beating slowly because the mice embryos were at a less active stage. On day two we added nicotine, which made the heart start to beat sporadically. The left atrium beat faster than the rest of the heart, causing an irregular rhythm. The heart ended up overdosing on nicotine and stopped beating, which was not the intended result. We learned more about hearts, as well as learned how to read and review scholarly articles.

Overall the neurobiology lab was a great learning experience and an informative way to learn how electricity works within our bodies. We would like to thank biology professor Martha Bosma for supporting us and donating her time. We would also like to acknowledge the many undergraduate and graduate students that spent their mornings serving us as well. Without these people, our experience would not have been the same!

‹ Summer Study: What Do Phase II Scholars Do? up Let’s Do Video! Video Storytelling with Rooted in Rights ›
Back to Top