My Experience as an LD Student 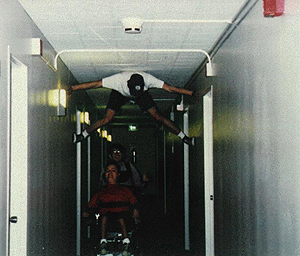 In this paper I will talk about the effects of learning disabilities (LD) on children in the public school system. I am basing this paper on my research, observation and personal experiences. It is my belief that learning disabled children have a hard enough time in the system without teachers and kids making fun of them.

The cause of LD is not really known, but what is known is that it seems to be hereditary. That means that if your parents have it you have more of a chance of having it as well. Other factors are premature birth, poor nutrition in the mother or infant, alcoholism, infants that have medical problems soon after birth and less learning before they go to school. Boys are affected three to five times more often than girls. Someone with LD is not mentally retarded, emotionally disturbed or brain damaged. LD does not mean stupid. Most LD kids have average intelligence and many are gifted.

There is no known cure for LD and it is not generally outgrown, but with proper education kids learn to find ways around the obstacles put in their way by the school system. The school system and some teachers seem to believe that everyone has to work and learn in the same way. This hurts LD kids' self esteem, mental health, the way they look at life, the way others look at them and their ability to have goals. They believe they are stupid and can't do anything right. Some kids respond to this treatment with anger and hit back, use drugs to cope or just quit trying. With this attitude they may go into jobs with skills under their real potential.

What helps is support from their families and teachers to help them get around obstacles. A loving family can help by not teasing about school work, but loving the child for what they are and praising their efforts to get what they have. Families teach children they are not stupid, lazy or don't care. LD kids need lots of help to get their work done because they work so slowly. They might need extra time for assignments and get directions according to the way they learn best. Teachers and parents need to work together as a team. Parents need to be sure that the child's different educational needs are not being neglected. Kids aren't always able to fight and be advocates for themselves.

Many people have lived through awful learning experiences to become very successful. Dr. Richard YaDeau is a surgeon who failed his first eight years of school. Thomas Edison was an inventor who could not be taught in the public school system. He was labeled mentally ill and not educatable. General George Patton didn't learn the alphabet until he was nine and didn't learn to read until he was eleven. Stephen Cannell, dyslexic, wrote and produced the Rockford Files, the A-Team, and other TV shows. Dr. Josef Sanders owns a publishing company. The schools wanted him in a school for the retarded, but his mother said no and taught him at home.

My experience is that I was told that I was going to get behind in reading more every year. The attitudes of teachers told me that I was stupid and would not ever be successful. It is hard for me to write about LD because I am remembering all the old feelings of hopelessness, worthlessness, of not being as good as other kids, not having friends and years of teasing. I think that it is not really possible to explain to someone who has not had the experience of just how hard it is to work and work and work just to keep up with everyone else day after day for years without knowing if it is worth it.

Every kid should be educated the way they learn best. This is not just a good idea--it is the law. The law has given me hope that someone cares in addition to my family. This law says that someone believes that I am worth the extra effort to educate because I can be a successful part of society as an adult.

Kids with LD do not have to be channeled off into labor jobs just because they can't learn at the same rate in which other kids learn. The new laws make me feel that there is hope for me and others going through the school system and somehow overcoming obstacles, adapting to our way of learning.

‹ My Cyberspace Heaven up DO-IT at the UW Computer Fair!!! ›
Back to Top