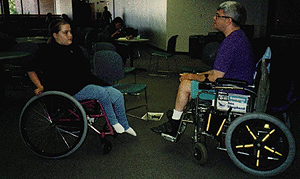 DO-IT Phase II Scholar Jenny and Mentor Douglas Lefever discuss college and the Internet during a free moment at the 1994 Summer.

To school, home, then study. It was the same every day. Day in and day out. I had a schedule which I rarely strayed from. Monday was spent at therapy. Tuesday, Wednesday and Friday were spent lounging in front of the T.V. or reading a sappy romance novel. Thursday it was off to the chiropractor for a quick adjustment, then a bite to eat at a Subway nearby. I was a very shy girl, modest in all aspects. I didn't think much of my grades, or if I had talent or not. I just worked hard so that one day I could afford to support a family. I never thought about furthering my knowledge or going for something higher than my good grades at school.

This all changed one day when a small, white envelope came to my door. My therapist had known that I have a natural love for science, so she had sent me some information on a program through the University of Washington. This program was called "DO-IT" (Disabilities, Opportunities, Internetworking, and Technology) and was open to all Sophomores and Juniors who were in some way disabled and excelled in the science world. To be truthful, I wasn't very interested at first. I didn't think my scholastics could compare on a larger level. My mother kept urging me to apply. "You never know," she said. I finally agreed to apply in the latter part of 1993. I waited and waited, still no reply.

Weeks later my mother and I planned on attending a workshop called "The Transition to College" offered by the DO-IT program. During this conference I was pulled aside by Sheryl Burgstahler and told, "You've been accepted!" I really didn't know what kind of accomplishment I had achieved. Later I was chatting with a graduated DO-IT Scholar. He told me that only a few out of many were selected. There were applicants from all over the Western U.S. from six different states.

Through this program I received an IBM PC, modem, and Internet access. This system would change my life. I was not yet aware of the endless possibilities which the Internet could give me. During the DO-IT Summer Study I was enlightened on MOOing (interactive communication through a central computer). I have since made many friends world-wide. I have a "family" via the net and have learned many things. I also have a whole group of unbiased people that I can communicate with through a few strokes of a key. The DO-IT program has changed my life forever.

‹ Transition to College - Just DO-IT! up My Experience as an LD Student ›
Back to Top