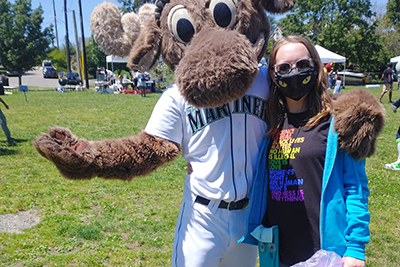 Did you know that anxiety disorders negatively affect thirty percent of adults in the United States, while they only affect eight percent of children and teenagers in the same country? I am a teenager with general anxiety disorder. Consequently, I generally have a difficult time getting used to new environments. However, my teachers and family members highly recommended that I participate in the DO-IT Scholars program so that I could find it easier to prepare for college. I have always wanted to go to college, but I have also always been extremely nervous to transition into adulthood. I feared that I would never become ready for all of the responsibilities that I need to take on in order to become successful as an adult. Nevertheless, when I got accepted into the DO-IT program, all of the staff supported me so much that I currently know much more about college than I did even a few weeks ago! This decreased my anxiety about needing to stay overnight away from my parents for so long. The DO-IT program has made fantastic progress in defeating my excessive anxiety about going to college.

I really enjoyed watching the movie called Fixed and discussing it with my peers. Here I learned that my disability should not stop me from being successful in college and beyond. When DO-IT staff member Kayla Brown showed the whole class Fixed, I immediately caught the premise of the movie—your disability makes you who you are and doesn’t need to be fixed! This premise sank into my soul so much that it played a major role in decreasing my anxiety about college.

Now, many people use the social model of disability. According to Kayla Brown, “the social model recognizes that disability and impairment are two different things. Disability is a social construct created by barriers within institutions, attitudes, stereotypes, and inequality.” The social model does not present any phenomena about needing to fix disabilities. Instead, the social model presents disabilities as deriving from and playing a major role in society. Consequently, learning about the social model helped me become less anxious about the life ahead of me because it made me realize that Americans are really improving when it comes to respecting people with disabilities. Therefore, in a lot of workplaces across the United States, the chance that I will be hired for a job will be similar to the chances that people without disabilities will get hired for that same job. This highly increases my confidences about my successes later in life.

Since this year’s DO-IT Summer Study was fully online, I knew that I could not spend my whole three weeks of summer study performing DO-IT related tasks. Therefore, I could finish all of my DO-IT related activities on time and still embark on local ventures that were not at all associated with DO-IT. I researched events that occurred within King County that I could attend with my mom. I found a super fun event where I met a whole bunch of Seattle sports-related characters and took selfies with them. This event occurred in South Seattle. After I met all of the characters, I made some pastel art for a nearby art club and got to watch various dance performances. This was one of the best ventures that I had gone on since before the pandemic! This experience showed me that I can still behave like a kid during my days off work as an adult. Since very few kid-friendly events occurred during the pandemic, I forgot that I could still embark on these kinds of kid-friendly ventures as an adult and not be judged for attending those events. I also got to spend an afternoon riding water slides at Wild Waves!