Disability in the Media: Part Two 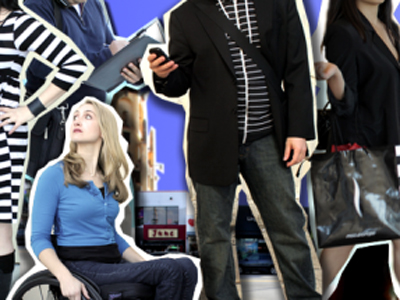 My Gimpy Life is written by the show's star, allowing the story to paint an accurate and nuanced picture of the character.

You may be asking, why isn't it okay for non-disabled actors to take on roles of characters with disabilities? Isn't this just another facet of acting?

First, when people with disabilities are not in control of how disability is portrayed, we end up with portrayals that are completely wrong. For example, you can tell when a script had no one with a disability involved in the creation of the story when you see a character who uses a hospital wheelchair and is not in the hospital. It may seem like a small detail, but it medicalized disability, coding it as sick or weak.

Christine Bruno, co-chair of the Tri-Union Inclusion in the Arts & Media of People With Disabilities (I AM PWD), commented on the issue of non-disabled actors portraying disabled characters stating: "There is no substitute for the lived experience of disability. It is not a technical skill that can be easily turned on and off. Disabled actors bring with them a lifetime of unique experiences that allow them to present authentic, nuanced portrayals that add not only to the rich, diverse fabric of our country, but create a greater understanding about the society in which we live."

Second, if we value diversity as a society, we must prove it. Diversity must be a priority, because if it is not, we end up with writing rooms filled with white men. What harm does this do? It allows for the neglect of diverse perspectives. It allows for white, upper class, and able-bodied characters to be the norm, and anything that is different as a deviation of this norm. In a world where the histories of minorities have been ignored or written by the groups in power, we need to understand that when people with disabilities and other minorities are in positions of authority such as writer/producer/actor, we are allowing for those perspectives to be brought to the forefront.

Third, television and movies influence the way people think. If portrayals exhibit negative stereotypes, this will effect how we see groups of people as a whole. George Gerbner's cultivation theory says that recurring "television exposures can be the basis for acquiring opinions, attitudes and beliefs" (Gerbner, 1998). Berger & Luckmann (1967) have also studied how media messages effect how consumers "construct reality." Negative stereotypes are so prevalent in our society; maybe the best way to combat that is through the media.

So, where are the actors with disabilities? In my last article I talked about Switched at Birth, which features actors with hearing impairments. The cast includes one of my favorite actresses Marlee Matlin, the only deaf performer to win an Academy Award for Best Lead Actress. Another show I enjoy is called My Gimpy Life, a web series that features Teal, an actress in LA who uses a wheelchair. We see her experiences getting and going to auditions, dating, and dealing with accessibility issues. The show is meant to be humorous, and because Teal herself wrote the script, it's even more enjoyable because it is a first-hand account. Peter Dinklage, a phenomenal, successful, and prolific actor who plays Tyrion on Game of Thrones. In the upcoming X-Men movie, Days of Future Past, Dinklage plays a character that is not disabled in the comic books. This pleasantly surprised me, since most of the time writers/producers will not cast disabled actors unless the character calls for it. I want Hollywood to go further. Even if a character doesn't have an explicit disability, hire an actor with a disability. If you have a character with a disability, give them a chance to develop beyond their disability. Make them as multifaceted as the non-disabled characters. This will make strides towards better disability representation, and break down stereotypes.

The idea of disability is a complex and diverse set of experiences and cultures, and many people without disabilities don't understand this. Having actors with disabilities portraying characters with disabilities brings an important perspective into the creation and presentation of stories. We can't be reduced to inspirational fodder or comic relief. If we are the storytellers, the audience will see the diverse set of experiences that shape our characters. More importantly, we will write our own histories.