Dis-course: Disability Representation and the Media, Part One 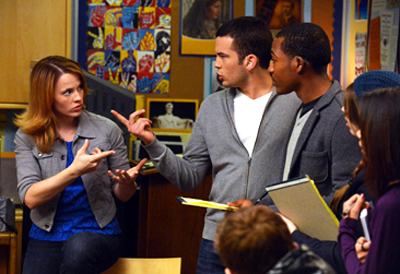 ABC Family's Switched at Birth showcases disability not as something to overcome, but as just another thing that makes a person unique.

When I asked my Facebook friends to make a list of characters with disabilities in the media, I got a wide range of answers spanning from Artie who appears on Glee to Tyrion from Game of Thrones. With so many examples across genres and formats, you would think that people with disabilities are adequately represented in the media.

But what is "representation"? Is it purely a numbers game, or is it more than that? Media representation is the ways in which the media portrays particular groups, communities, and experiences. This includes the accuracy of portrayals, the diversity of perspectives, and whether those portrayals perpetuate negative stereotypes. It's not just about quantity—it's about quality.

The sad fact is that there are very few characters on television that openly identify as being disabled—1% according to Where We Are On TV 2011, GLAAD's annual report about diversity on television. That dismal statistic is a problem on its own, but it only scratches the surface.

The characters with disabilities we do see on TV are typically white males. In addition to the lack of racial and gender diversity, many disabled characters are fueled by stereotypes of "overcoming" their disability or being inspirational to others. While there is nothing wrong with a character being an inspiration to others, it should not be the only purpose that they serve in the narrative. Here's a test to see if a disabled character actually has a purpose beyond their disability; replace the disabled character with an able-bodied one. Does this character have a story, goals, relationships, and interests? If they don't, we have a problem.

The TV show Switched at Birth is a positive example. It has featured many individuals with hearing impairments and has aired an entire episode in ASL (American Sign Language). One of the reasons I love this show is that one of the main characters is hearing impaired, but that is not her main story arc. She is a high school student who plays sports, is engaged politically, and aspires to be a chef. Her three-dimensionality makes her a more accurate representation of a person with a disability: She is much more than her deafness.

Of course, there are many negative examples in the media, like Glee. The reason I'm on Glee is because the show boasts at being highly diverse and forward thinking. They have many people of color on their cast, and even showcase some characters that have disabilities. Artie, for example, is a high school student who uses a wheelchair. The reason his plotline is problematic is because he always longs to be able to dance. Instead of the writers using this part of his character to, you know, develop his character (i.e., let Artie learn he can dance while also using a wheelchair), they come up with a dream sequence where Artie gets up out of his chair and dances as an able-bodied person. This just perpetuates the idea that people with disabilities can only achieve happiness if they are "normalized" or "cured" of their disability.

If we can accomplish better quality and quantity of disability representation in the media, we start exposing the world to more realistic experiences of individuals with disabilities. We can begin a true dialogue about disability and create points of reference for doing so. In this way, TV and film characters have the potential to change the dominant discourse and attitudes within society. They can help bridge divides and break away from stereotypes.