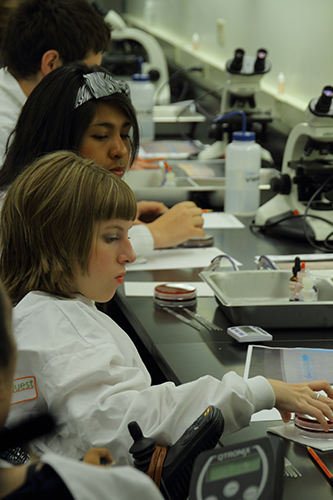 The DO-IT Center, its staff, and its participants have been featured in numerous articles in newspapers, journals, and magazines. Staff, mentors, and collaborators have received many local, regional, and national awards. A few are described below.

Presented to DO-IT Director Sheryl Burgstahler for being a role model to the national community of excellence in technology and/or STEM.

DO-IT was inducted for its comprehensive mentoring program and its position as the longest standing online mentoring community for individuals with disabilities in the world.

Sheryl Burgstahler was honored for her leadership in working with students as an educator and mentor and empowering people with disabilities with technology.

2007 Career Opportunities for Students with Disabilities Greenberg Award for Innovation

Presented to Sheryl Burgstahler, it recognized innovative efforts in securing employment opportunities for students with disabilities.

Richard Ladner and Sheryl Burgstahler, co-directors of AccessComputing, and Tammy VanDeGrift and Annamarie Poginy were recognized for their manuscript, The Game of Life Workshop - Reaching Out to High School Students with Disabilities.

The Trace Research and Development Center recognized Sheryl Burgstahler for extraordinary accomplishments in motivating stakeholders to promote the success of people with disabilities.

DO-IT’s contributions to excellence in precollege education in Washington State were recognized.

The producer of DO-IT videos, Charlie Hinckley, was recognized for The Winning Equation - Access + Attitude = Success.

1997 The President’s Award of Excellence in Mentoring

Recognition was given to DO-IT for the its creative use of the Internet with individuals with disabilities.

Presented to DO-IT for an outstanding record of service to people with disabilities.

More information about awards presented to DO-IT, its staff, and participants can be found at www.uw.edu/doit/about/awards.