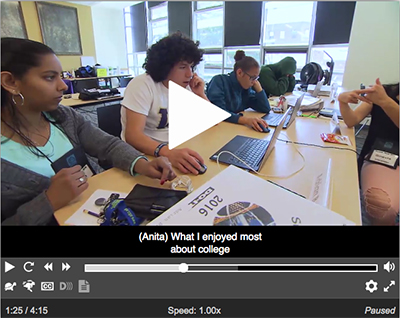 The release of Able Player 3.1 was announced at the CSUN 2018 International Technology and Persons with Disabilities Conference in San Diego. Able Player is an accessible online open-source media player designed and developed with support from AccessComputing. It features high contrast buttons and controls that can easily be operated by screen reader users, keyboard users (without a mouse), and speech input users.

It is the only media player that supports all five kinds of <track> elements, introduced in HTML5 to provide a means of synchronizing text with media during playback. The five kinds of <track> elements are captions, subtitles, descriptions (which can be read aloud at appropriate times by screen readers), chapters (which add structure to videos, enabling users to jump to the start of particular sections), and metadata (enabling interactive features in videos such as clickable hot spots). It also parses the content from chapters, descriptions, and captions (or subtitles) tracks and reassembles them into an interactive transcript. The content of the transcript is highlighted during video playback, and users can click anywhere in the transcript to play the video at that point. Able Player also features “slower” and “faster” buttons that enable users to control playback rate, and supports sign language in a supplemental video, synchronized with the main video.

Version 3.1 includes a number of bug fixes and enhancements. Perhaps the most noteworthy new feature is support for the playsinline attribute, which instructs mobile devices to play the video within its original context in the web page, rather than load the video into the device’s native video player. In prior versions this had been a problem particularly with iPhones. When a user tapped the play button in Able Player, the video would be loaded in the iOS video player. Users could watch the video there, and access captions if enabled in their accessibility settings, but it was otherwise impossible to access all the other features of Able Player that make video interactive and accessible.

At the 2017 CSUN conference, we conducted interviews and focus groups with individuals with disabilities throughout the conference and acquired insights into how users with various disabilities interact with online media players. These insights will be used to guide future development of Able Player. A paper titled “Media Player Accessibility: Insights from Interviews and Focus Groups” will be published in the 2018 edition of The Journal on Technology and Persons with Disabilities.
‹ How Do You Travel While Disabled? up Resource Highlight ›
Back to Top