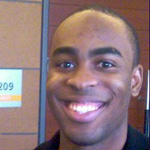 Hello everyone, my name is Patrick Okocha and I am a senior at the University of Washington double-majoring in English Literature and Communications. I was born here in Seattle but relocated to Sacramento, CA in 2004 when I was in the eighth-grade. I graduated from Laguna Creek High School in Elk Grove, CA in 2009 and decided to return back to Seattle for college. I currently work at The Seattle Times in the sports department as a news assistant where I have had the fortune to see the inner-workings of how major newspapers are run.

As for my cultural background, I am first-generation American from Nigerian immigrants. I am true an “African” American…Correct? Or could it be that I am an “American” African? These are internal questions I have faced for a majority of my life. My cultural identity. The way American culture portrays African American culture through the news and media, differs from the experiences I had growing up. As a black male born in the United States who has never been outside the country, I should be in professional sports, on the corner selling drugs, or in the music industry. At least, if I followed the portrayal of African American men in the media. But, as an individual with Nigerian parents, college was never an option, it was a prerequisite. Conflicting expectations placed on me have led to a sense of confusion.

So the question is: Why go to Barbados and how is that going to help your cultural identity?

First, I would like to thank the OMA&D and Communication departments for organizing this trip to Barbados, a country that is of 90 percent African descent. Professor Ralina Joseph, who is leading the trip, introduced the theme of the trip as “Rupturing the Narrative” in which, I will be able to embark on cultural studies and re-think any preconceived notion of the African diaspora in the Caribbean. Conversely, I will be able to see the portrayal of the African diaspora in the United States through the media and interaction with the locals. What do the Bajan’s think of the portrayal of African Americans in the United States? Do they believe the perpetuation of black men and women in American is an overgeneralization? This is a country that is 90 percent of African descent vs 14 percent in the U.S. I’m seeking to learn how much the media has an influence on the culture versus in the U.S.

As an African-American of Nigerian descent I am extremely excited in learning about Bajan culture and the influence of British culture since the colonization. Since Nigeria and Barbados got their independence from the British in the 1960s, it will be interesting to see any correlation within the cultures.

I look forward to updating everyone on my experience abroad. Thank you all for reading.