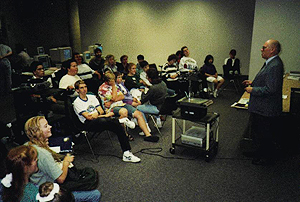 Professor James Tillman lectures on the feasibility of an expedition to Mars to the enthusiastic group of DO-IT Scholars.

Mars hasn't been explored by humans yet. Technology has been involved in the development of spaceships, but these spaceships haven't explored farther than the distance of the moon. In 1981 NASA had the technology and completed the first product of its space shuttle project, costing a great amount of money. In the long run, however, it would be less expensive than the Saturn V rockets in the days of old were to build, launch, and maintain.

Pinky Nelson, an astronaut who presented a lecture about the physiological effects of space travel, has traveled to space three times over his eleven year career. According to him, depending on the number and difficulty of the tasks each particular space shuttle mission is to carry out, the number of the astronauts could be five to seven. A few months before the mission, the chosen astronauts converge in Houston for training so that they can accurately carry out the planned escape routes, both inflight and prelaunch, in the event of an emergency.

When all astronauts have completed training, they are ready to go into space. After going into orbit, according to Pinky, half of the astronauts may get sick because of the difficulty posed by contradicting signals between the ears and eyes and other parts of the body. By the next day, however, all of them become all right.

The cycle of a day in space is about the same as on Earth, but a few things are different. For example, on Earth the sun rises and sets in a 24 hour cycle. In space, however, it rises and sets during a period of 90 minutes, or 16 times in 24 hours. Another example is that in space all objects weigh nothing.

Mars has largely been a mystery for a long time, even when astronomers of the 1600's began looking at it through their primitive telescopes. Today, we know more about Mars. It is three- eighths the size of Earth, and its atmosphere is mostly made up of carbon dioxide. It orbits the sun in a year as 683 earth days or 687 Mars days. Because scientists believe that Mars might have some kind of life, they try not to put earth organisms there by going through a rigorous routine of sterilizing all the components of whichever vehicle will be making the journey.

In conclusion, the astronauts might be able to travel to Mars and around the universe in the future. Scientists and engineers are working very hard to make it happen. As scientists try to make exploration of Mars and beyond more accessible to humanity, factors such as those Pinky spoke of must be considered in these designs and plans. This is imperative so that space can be explored efficiently and comfortably.