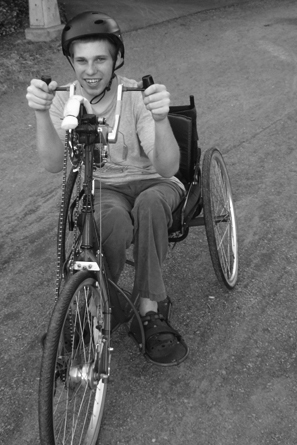 Phase I Scholar Jeremy bikes during the Tour de UW.

Tour de UW was a great experience for everybody during Summer Study. During the tour, we explored the UW campus on different kinds of bikes designed for people with physical disabilities. The bikes introduced us to new ways of biking that we had never experienced before. It was interesting seeing the different kinds of steering mechanisms that the bikes had, and, because of this, how some were harder to steer than others. During the bike ride we took a few interesting detours. We flew past the cone that designated the turn-around point and pedalled what seemed like halfway to Woodinville, WA! Also, a bike broke down, and emergency bicycle surgery had to be performed.

Riding a hand crank bike was fun but was also exhausting. It is amazing how much the view changes when riding lower to the ground. Since the steering on the modified bike was completely different than a regular bike, navigating on the hills was a real challenge.

Everybody had a great time biking and socializing. By the end of the night many of us were tired and ready for a break. At the beginning of the night several people ran down to the bikes, but afterwards, nobody ran back up the hill to the dorms!

‹ University Village Outing up Microsoft Past, Present, and Future ›
Back to Top