Tech Tips: PDF and People Who are Blind

Many organizations and companies are moving to the World Wide Web as their main distribution for the public and their employees. Adobe's Portable Document Format, or PDF, is often used to publish material. Unfortunately, PDF documents are treated as images in the standard PDF reader, making any information inaccessible to someone who can't see the screen. Adobe has made available resources to convert simple PDF files, but these resources have not always been successful. 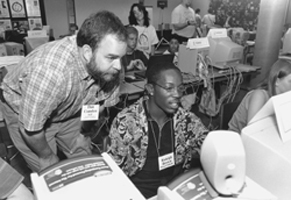 A conversation that occurred on one of DO-IT's electronic discussion lists about the challenges of using PDF files by people who are blind, points out some of the issues that come about when using the PDF format.

Speaker One: Most companies that offer job applications to be downloaded from their Web server are only available in PDF format. On one hand, I can understand why they want to use up-to-date technology. However, I don't agree with them only having the documents available in PDF format because it causes some accessibility problems. When I downloaded an employment application from a city's online server, it was in PDF format. When I sent it up to the PDF translator to get converted to text, the translator left out words and people in the career center at the community college had trouble interpreting it just like I did. I think the way to help us keep out of situations like that is to have the form available in more than one format. For example, they could have it in Microsoft Word™ form for Word users, PDF form for those using the Acrobat Reader™, and text/HTML for those using other programs. What does everyone else think of this idea? What would you do if you encountered a PDF file when you went to apply for work? Thanks.

Speaker Two: I agree with you on this that there should be more than one format. However, I am not sure how to get all companies to comply, not to mention other places, such as my university. As for what I would do, I would give the Acrobat Reader™ a spin and see what I could do. I haven't ever tested it, but after downloading/installing Adobe Acrobat Reader™ there is an accessibility plug-in that should also be downloaded and installed. I assume that this would help in the use of the reader. Have you tried this? If so I would be interested in how it worked for you. If not I know that the files can be downloaded from www.blindprogramming.com/general.htm.

Speaker One: Well, the advantage of PDF format is that it is platform-independent, i.e., the format stays the same no matter what computer you read it with. I suspect that the conversion done by the accessibility plug-in mentioned is similar to what you can get online via e-mail or the web. However, I agree that the conversions produced by the PDF-to-text translators are often inadequate, especially with application forms. If the form were also available in HTML, then everybody who can access the Internet can read it.

Speaker Two: Well, I have never tested the actual reader with the accessibility plug-in, but if you plan to do anything with PDF, I would think it would be best, seeing it is an actual true reader of the format, not a converter. I assume the accessibility plug-in is somewhat along the lines of what MSAA does for Internet Explorer though I could be wrong.

Speaker One: You'd need Acrobat Distiller to fill out the application. My recommendation is to call the company and ask for a more user-friendly format. They are required by law to provide the application in accessible formats.

Speaker Two: You bring up a very interesting point. In fact, that is a policy that the FCC is trying to enforce. Has anyone out there visited their disability issues task force? I think you should go there to learn about what they are doing to help enforce the telecommunications act. It specifically states that all telecommunications equipment needs to be accessible to the disabled. I think they are working on a policy mandating alternative file formats. However, I would recommend that everyone check the online service to learn what they are doing. The address is www.fcc.gov/dtf. I just thought you would like to know that in case you didn't hear about it already.

The above discussion reflects just one of the topic areas concerning accessible information on the Web. The PDF issue not only affects those who are blind, but also anyone who uses speech output in order to read. When we find a Web resource that isn't accessible, it's important to relay that fact to the owners of the Web site in a meaningful and diplomatic way.

‹ Parent-to-Parent up The Thread: Working as a PWD ›
Back to Top