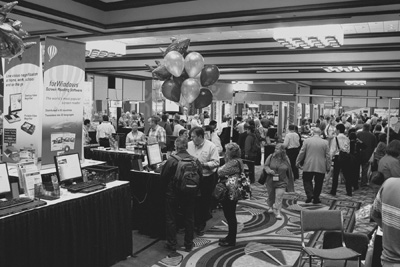 CSUN 2008 is a great resource to find the latest in accessible technology.

Every year for the last twenty-three years, the coming of spring has been marked not only by the return of songbirds, flowers rising from the soil, and the NCAA men's and women's basketball tournaments, but also the annual International Conference on Technology and Disability, which is hosted by the California State University at Northridge (CSUN). This conference features 150 exhibitors and 300 break-out sessions related to assistive technology (AT) and technology accessibility.

The vast array of AT can be mind-boggling to first-time conference attendees. It was at my first CSUN many years ago that I learned that if a person has only enough physical ability to move his or her eyes or control brain activity, there are technologies available that allow that person to operate a computer, use an augmentative speech device, and control the electronic devices in their environment. This year, the most exciting news wasn't about amazing new technologies, but it was about the growing number of AT products that are available for free, particularly software for individuals who are blind or visually impaired. For example, Orca, a free screen reader and magnifier for the UNIX and Linux operating systems, announced a new version at CSUN; Apple demonstrated its screen reader VoiceOver, which is built into the Mac OS X operating system; and many presenters talked about NVDA, a free and open-source screen reader for Microsoft Windows that is rapidly improving with support from the Mozilla Foundation.

Despite all the AT that's available, individuals with disabilities still face major barriers in accessing mainstream information technology (IT). There are websites that require eyesight, software applications that require the ability to move a mouse, and video and audio content without captioning or transcription that requires hearing. 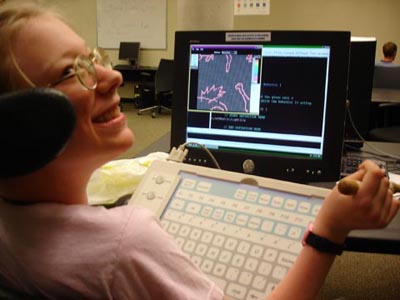 An example of a student using assistive technology

Barriers to access was a hot topic at CSUN, and the conference provided an opportunity for people on the forefront of the IT accessibility movement to brainstorm and share ideas. Much of this interaction occurred informally, outside of scheduled conference activities. However, there were also many scheduled sessions that addressed IT accessibility involving representatives from Microsoft, Google, IBM, AOL, Yahoo!, and the Mozilla Foundation, all of whom described their efforts to increase the amount of accessible software and online content.

For web developers, there is a growing trend to build complex web applications by plugging in widgets from code libraries and toolkits, rather than developing everything from scratch. This simplifies the process of creating rich Internet applications. This trend could be a good thing for accessibility, as long as the widgets in the toolkits are accessible. Several of these libraries and toolkits, including Google Web Toolkit, Dojo Toolkit, and jQuery, are moving towards ensuring accessibility.

CSUN began with a keynote presentation by Jim Fruchterman, one of the pioneers and leading innovators in the field of AT. Jim is an outspoken advocate for social enterprise, creating, and investing in businesses whose goods or services solve social needs. His latest venture, Benetech, is the non-profit parent organization of several companies that use technology to improve human rights, literacy, and access to books for individuals with print disabilities. In his speech, Jim described his vision of a future where individuals with disabilities have full access to information on devices they already use—cell phones, MP3 players, or public terminals at the library—without having to purchase or download specialized software. 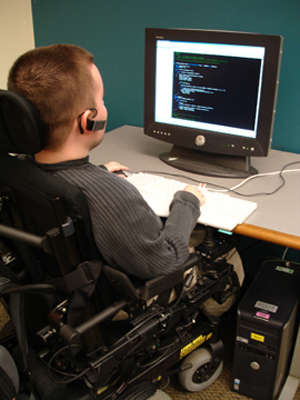 Another example of a student using assistive technology

He also spoke enthusiastically of the power of human networks that can achieve more than one person or small group. Wikipedia is an example of this type of collaboration. It offers a platform to collect knowledge by harnessing the efforts of millions of people at little or no cost. Jim's own project, Bookshare.org, is another example. Bookshare.org members scan and convert books to accessible electronic format and then contribute them to a growing library. This library can be accessed by other members. Currently there are over 37,100 books and 150 periodicals available through Bookshare.org. The open source movement is another example of the strength of human networks. Open source allows developers to contribute to software applications. This collaboration has spawned free products such as the Linux operating system, Firefox web browser, and assistive technologies described earlier in this article.

According to Jim, "We take this economic thing a little too seriously." The mindset that "if it's not economically successful, you shouldn't do it" stifles true innovation and does nothing to solve the world's problems. In closing, he said "I look forward to working with all of you toward making the world a more inclusive place for everybody on this planet." These were excellent words to kick off the conference and to carry with us in our daily lives, long after CSUN has ended.

‹ Disability Mentoring Day up The Thread—Helpful Robots? ›
Back to Top