Summer Study '06: What Do the Phase II Scholars Do?

Phase II Scholars return to the University of Washington campus for their second Summer Study. They meet the Phase I Scholars as they participate in their first Summer Study, learn about college life and career preparation, and participate in a one-week workshop with postsecondary instructors. The following articles summarize one of the experiences of the 2006 Phase II Scholars. Others can be found in the online version of this issue at http://www.washington.edu/doit/summer-study-06-what-do-phase-i-scholars-do. 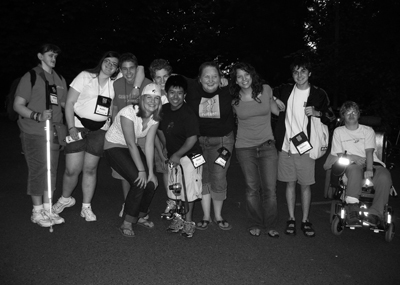 Our Phase II workshop was HIT The Note, which took place at Egan's Ballard Jam House-a jazz and blues club located in the Ballard neighborhood in Seattle. Our workshop involved making an animated video using Stop Motion and 3D-Me-Now technology. We worked with Duff Hendrickson, Peter Oppenheimer, and Suzanne Weghorst. Suzanne is the lead staff for the Human Interface and Technology (HIT) Lab on the University of Washington campus and had just opened the jam house, her new business, one week before we began our workshop! She allowed us to use her lounge as a studio to create our video masterpiece in just five short sessions. Duff helped us learn the 3D animation technique while Peter helped us with the 3D-Me-Now program.

With our team of five Phase II Scholars and two Interns, we divided and conquered. Sakina and Marlin worked on the Stop Motion, a generic general term for an animation technique which makes static objects appear to move. Noah, Vishal, and Bella worked on making the Avatars-an icon or representation of a user in a shared virtual reality, the script, and the soundboard, a Flash web page with buttons that play short, often humorous sound clips. Lukas worked on the music soundtrack and Laura worked on picture editing. We all contributed to making the pictures of the characters and the voices; even Lukas' service dog, Mystere, got involved. This project has opened our minds to the reality of teamwork and collaboration. With the help of team members and mentors, you can accomplish anything!

Science in the School Yard

"That which is never attempted never transpires." This is a statement that we, the Phase II Scholars who participated in the workshop Science in the Schoolyard with instructor Leah Melber, came to live by at the end of our week together. On our first day, Leah, as she asked us to call her, introduced us to the basic principles of science using a chicken's egg that we cracked into a cup, observed, and described in our own words before learning the proper scientific terminology. This first experience in science was for some the fuel to feed the fire and forge the path and desire to learn more the rest of the week. Other things we did that first day included an observation and assessment of fox fur, which was interesting to some and a bit disturbing to others, as well as an apple observation and identification.

Phase II Scholar Kayla B. explores Science in the Schoolyard

The rest of our week was spent primarily outside where we did field studies on the plant and animal life on the University of Washington campus and at the nearby Burke Museum of Natural History, writing field guides about the plants near the Husky Union Building (HUB). Shavonne found that the experience in the field with insects was not her forte while Cassie found the insects and learning their identifiable differences very interesting. Leah also taught us something called "transecting," which is observing small areas of space only. All of us enjoyed learning about science outside. For many of us, we had only experienced science via textbook and in a classroom or lab setting. One important thing we all learned is that, at times, nature is better left to its own devices.

The Game of Life

Our group spent a week together with our Intern, Jessie, our Instructor, Tammy VanDeGrift, and several graduate students in The Game of Life workshop. During the workshop we learned how to program cells into different codes on the computer. These codes allowed us to manipulate the cells in the ways we wanted to translate them into computer pictures. We learned to change codes to manipulate the cells so that we could design the picture we wanted. There are different codes one can enter to change the color or the movement of the cells. We also learned how to change the codes so that the computer would ignore what you told it. Once we entered our codes we also learned how to tell the computer to repeat a certain menu so that the codes cycled over and over. This was what often gave us the results we were trying for. 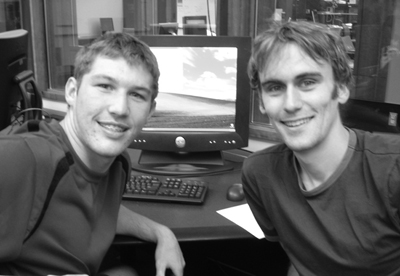 One of the really enjoyable things about The Game of Life workshop was that, even if you made a mistake in changing codes, etc., what was created still looked like a neat project that you had planned all along. Working together as a group was also very exciting, and we all came up with interesting projects.

Andrew was so inspired by the workshop that he wrote this poem:

The Game of Life has been quite an experience filled with opportunities, struggles, and goals,
There was never a moment that was uninspiring, boring, or dull,
For the past week the Phase II Scholars of the DO-IT Team,
Have been living in a fantastical dream,
A dream filled with coordinate squares in the land of Java,
With cells vibrantly colored from robin's egg blue to a ferocious, red hot lava,
These cells, whether being born, surviving, or meeting fate,
Have impressed Jennifer, Zach, Andrew, and Nate,
These Scholars have gained a new understanding of technology in action,
These experiences have left these Scholars with great satisfaction.

While at DO-IT Summer Study this year we were involved in a week-long workshop about web accessibility, Curb Cuts in Cyberspace. Our team included Interns Julie and Maryann. Our instructors were Dan Comden, who runs the UW Access Technology Lab, and Rick Ells, a member of UW Computing & Communications. We spent the week evaluating the University of Washington's Undergraduate Research Program web pages and preparing a report on the accessibility and universal design of the site that we gave to the department. Though there were several problems with the accessibility of the website, there were also many good features. We also briefly evaluated the UW homepage, which had a few inaccessible Flash areas.

Two of the important tools we used in determining the accessibility of websites were the Web Accessibility Toolbar, a computer toolbar used to aid manual examination of web pages for a variety of accessibility aspects, and the WebAIM website, a very informative site about web accessibility. The workshop taught us how inaccessible the Internet can be and that there are great tools and resources to both determine and correct this!