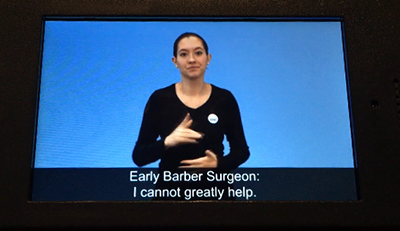 I went to London this summer to study abroad. I was in London for five weeks, and I stayed with a homestay family that was a 30 minute ride from London on the Tube. I took three classes, learning about the theater, architecture and art, and the culture of London. I also traveled to Hampton Court Palace, Brighton, and Stratford-Upon-Avon.

Inside and outside of class, I was observing London and how it compares to home in the United States. London is a fantastic hub for history; many places there are centuries old and retain original architecture. For example, London used to just be a square mile, with houses surrounded by stone walls to protect them from outside attacks. Some of these still stand. However, London’s preservation of history leads to less accessibility for people with disabilities. Many of the theaters in London had stages that were too small to accommodate sign language interpreters, which I needed to fully understand and enjoy the plays. The one time I could get interpreters, they stood on a separate platform next to the stage.

Yet, I was happy to see that new and rennovated buildings were accessible. At the Wellcome Museum, they had an elevator, large print descriptions of all their exhibits in booklets, audio tours in British Sign Language (BSL), and captions. Most of main London also had curb cuts, though these were not marked and often blended in. Crosswalks were another story. Some were marked and required cars to stop, but many weren’t marked and expected the pedestrian to yield to traffic. However, sometimes cars would stop for wheelchair users or people who may be slower walkers.

For accessibility, the Tube was also an interesting case: I noticed that there were more limited accessible wheelchair stops in central London than there are in the outskirts of London ranging from Zones 2-6. However, a few certain Tube lines had more wheelchair accessible spots than others. There were also smaller busses that focused on transporting people with mobility impairments.

London is an amazing place. Its culture is very diverse and people are understanding and open-minded. London is somewhat ahead of the United States in some ways like providing audio tours with the option of having an interpreter or putting out large print booklets for the public to use rather than having the person ask for one. However, London is quite the dichotomy—it is a very forward moving city that promotes accessibility for both its residents as well as tourists, but it also wants to preserve its history and landmarks, most of which are not very accessible.

Though London is pretty accessible, I did feel very lucky to be a citizen in the United States and protected under the Americans with Disabilities Act. I enjoyed the study abroad not only for myself and my education, but as a person with a disability. I was able to see how another country approaches the idea of disability, and I am eager to experience what other countries offer. I challenge people with disabilities to study abroad; I believe they would get a life-changing experience as a student and a person with a disability. Challenge what you know and have experienced with what you don’t know and haven’t experienced.

‹ Fall is the Scholarship Season up Inclucity ›
Back to Top