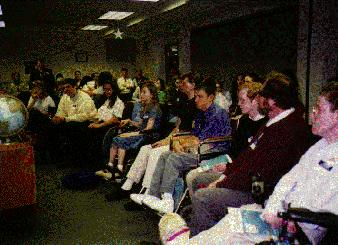 DO-IT Scholars at the Hawking Lecture.

DO-IT Scholars and other students with disabilities had some special time with world-renowned astrophysicist Stephen Hawking at the Pacific Science Center on April 14. Hawking was in Seattle to deliver a public address on the possibilities of time travel.

The DO-IT program co-sponsored his appearance with The Institute for Science, Engineering, and Public Policy. Twenty students were treated to free tickets to the evening lecture. But Hawking also found space in his tight schedule to chat privately with DO-IT Scholars and other youths with disabilities for the second time in the last three years. The visit was highly publicized, garnering front page coverage in both major Seattle newspapers, stories on all three local network television news shows, and a mention on CNN, the national broadcast news network.

DO-IT Scholars who attended were impressed with Hawking as a scientist and a person. Hawking has the nerve disorder amyotrophic lateral sclerosis (better known as ALS or Lou Gehrig's disease), uses a wheelchair and travels with two nurses. He conversed with the students and delivered his evening address by using a computer-based voice synthsizer. He holds the same chair in physics at Cambridge University in England once held by Sir Isacc Newton and works from 11 a.m. to the early evening each day, correcting papers, seeing students, attending lectures, and writing. He is well-known for his dry wit and answered many questions with humor. He began his evening lecture with a limerick:

"There was a young lady of Wight,
Who traveled much faster than light.
She departed one day
In a relative way,
And arrived on the previous night."

DO-IT Scholar Todd asked Hawking about his personal life. Hawking replied that he is married and has three children, one of whom works at Microsoft and was present at the gathering. Matt, a DO-IT Scholar who is deaf, asked through an interpreter if Hawking has experience communicating with those with hearing impairments. Hawking answered that he uses the computer screen mounted on his wheelchair to communicate with his mother who cannot hear the synthesized voice. 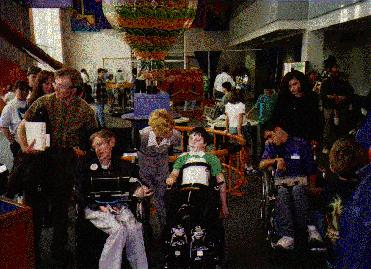 Priscilla, a DO-IT Scholar who also attended the event, shared her experiences with everyone on the DO-IT electronic mailing lists:

Susanna, age 11, came all the way from Spokane to be part of the group. Her mother talks about the visit.

‹ In Memory of Andrew up Technology Tips ›
Back to Top