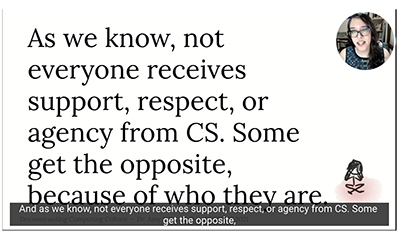 There are a lot of computing education (CS) conferences—far more than I’m used to in other academic fields. There’s the (big) SIGCSE Technical Symposium, the (rigorous) International Computing Education Research conference, the (European) Innovation and Technology in Computer Science Education (ITiCSE), the (Finnish) Koli Calling, the (originally German) Workshop in Primary and Secondary Computing Education, the Australasian Computing Education Conference, the (Asian) CompEd, the (North American) Computer Science Teachers Association Conference, and I’m sure many others I’ve forgotten. Historically, computing education has been far more regional than most global research communities: This could be due to different amounts (or lack thereof) of funding or the national and cultural ties to public education.

There is, however, one thing that all of these conferences have had in common over time: A broad disregard for issues of diversity, equity, and inclusion in CS. I don’t think that’s as true anymore—the SIGCSE venues above have an increasing focus on diversity, and certainly many existing education and learning sciences venues that have long centered diversity are beginning to examine computing—but it’s still the case that diversity is not central. For anyone who studies diversity in CS, or anyone with a marginalized identity in CS, the feeling of attending a SIGCSE event can be one of disregard. It often feels as if the broader community is tacitly saying, “Yes, diversity matters too, but I really want to tell you about this new tool that raises average grades.” Diversity simply feels like an afterthought. And for many marginalized and oppressed people in CS, it is unavoidably and inescapably a central focus.

This is where IEEE RESPECT (The Institute of Electrical and Electronics Engineers’ Annual Conference on Research in Equity and Sustained Participation in Engineering, Computing, and Technology) comes in. Originally founded by Tiffany Barnes in 2015, the conference was intended to be a venue that explicitly focused on diversity in computing. It began with a slightly more narrow focus on broadening participation in computing, mirroring the many NSF-supported projects in North America that had that same framing. It’s grown over time to draw computing education researchers and practitioners who center diversity, equity, and inclusion in their scholarship and teaching, tending to draw many more education researchers than other venues.

I’m embarrassed to admit it, but when I first heard of RESPECT, I naively thought, “Do we really need another conference?” And in some ways, I still think that’s true: Fragmentation of a research community is rarely helpful, and splintering diversity work into a separate venue only reinforces the idea that other venues don’t have to deal with it. I certainly don’t have the bandwidth to attend SIGCSE, ICER, ITiCSE, and RESPECT, along with other conferences to engage with other communities. On the other hand, there can be great power in focus. After being invited to give the closing keynote this year at RESPECT 2021, I was excited to give diversity my full attention. And as I quickly learned, that focus can be productive.

For more information on this topic, read the full article on my blog.