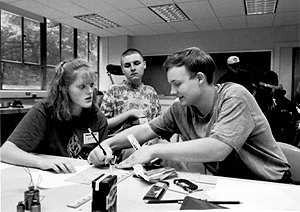 Matt works with Katie and Mark on a project involving Hershey bars and rulers--the measuring kind.

Phase II Scholars who return to the University of Washington for their second Summer Study spend the week in small groups with a faculty member focusing on a specific area of study.

Our group study project in 1994 dealt with a few of the more basic techniques used in Recombinant Genetics. The focus of our four day study was to artificially create, by genetic means, the organic chemical Streptavidin, which is important to biotechnology for its ability to transport medicines to a desired location in the body.

The first day of the project was dedicated to familiarizing us with the basics of genetics. When referring to a DNA molecule the analogy of a train seems to work best. DNA is like a train composed of a very few types of "boxcars" that all attach to each other end to end. Strands of DNA several "boxcars" long carry instructions for specific things. With this basic understanding of what DNA is we were able to understand what was happening in the colored specimen tubes filled with chemicals which we manipulated for the next three days.

The second day we began our excursion into the wonderful world of Recombinant Genetics. In simpler terms Recombinant Genetics is taking a sample of genetic material (DNA) and breaking it. Then you take the pieces of the strand and either remove something you don't want or put something foreign and new in, then reassemble the pieces. Through a complex procedure called PCR or Polymerase Chain Reaction, the group edited E-Coli DNA so that it became a living factory creating Streptavidin. The whole process took more than one day to complete but what we set out to do in our most major lab was accomplished. We had actually modified a life form genetically to produce a chemical that it does not produce naturally and that is beneficial to mankind!

Our group also had the opportunity to do an experiment called Electrophoresis. This process separates fragmented DNA across a gel solution by molecular weight, leaving dark bands consisting of DNA of different weights. Both before and after our experiment creating Streptavidin we were given the opportunity to look at molecular structures on a special graphics computer. It had a feature which allowed us to see the various pictures in nearly 3-D with the use of special glasses. Along with the discussions of what and how things are done in genetics this was one of the most fun things we did in our special project.