Preparing Your Child for College 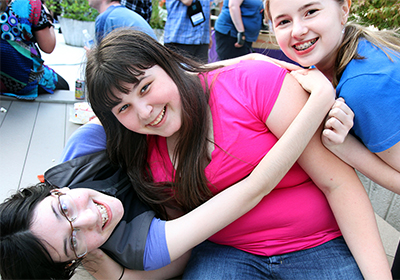 Parenting is a job that is constantly changing, and it comes with many fears and emotions as your child gets older and becomes more independent. This can be a difficult process for any parent, including those with a child with a disability.

My daughter Lindsay is neurodivergent with autism spectrum disorder and attention deficit disorder. Lindsay has always had a strong sense of self. She is rigid in some of her beliefs, and has always been a late bloomer. It has been difficult for me to realize that she does not operate with my same sense of urgency and on my time schedule.

We began talking with Lindsay about college at an early age. While academically bright and a voracious reader, she was not the best scholar in high school, preferring to pursue only what interested her. She and her teachers were often frustrated with her lack of motivation. College intrigued her because she heard that you were able to pursue studies that interested you.

As Lindsay got older, we required her to attend 504 meetings with her teachers, so she could explain how school affected her emotionally and academically, as well as what accommodations she thought would best help her handle the stress of school. Involving her in the conversations with her academic team, on how to approach her teachers, due dates, work habits, and expectations was critical to her success.

We allowed her to fail classes when she did not meet the academic standards. She had to do summer work to catch up, and she quickly decided that she’d rather do her work during the quarter than during the summer. Experiencing failure provides young people, including those with disabilities, the opportunity to make a new plan to regroup and recover. Too often, parents try to protect our children from failing, hampering their opportunity to handle difficult situations.

As parents, we felt that it was important to teach Lindsay about her disability, both through books and by meeting others who were neurodivergent. Sometimes we’d try to push her into activities that were uncomfortable for her, which she often resisted. The DO‑IT Program was a major turning point for her, for it was when she came to realize how she would be able to learn, socialize, and advocate for herself at college. When she returned to high school after Phase I of Summer Study, her mentor suggested they promote a stronger college experience, where Lindsey would have to reach out to get support, and her mentor would no longer check in with me. Lindsay had to learn how to ask for help, make decisions, and follow through on her own—all important skills for a successful college student to have.

Lindsay was very excited the first time we visited Pacific University—right away, we knew the hard work we had invested was time well spent. I had her sign up with Learning Support Services early, so she could get her documentation submitted and her needed accommodations set. Orientation was a struggle, but Lindsay quickly learned where to go when she needed guidance and how to get help.

One of the biggest struggles for most students, not just those with disabilities, can be dorm life. Dorms are small, and students don’t usually agree on quiet time, visitors, parties, and more. Lindsay tried her first year, and struggled deeply with the situation. After that, we chose to pay the extra fee to ensure she had a single room so she could have a quiet place she could go to be alone. However, after her study abroad experience her junior year, she felt comfortable enough to move in with roommates again, this time being friends she knew and had chose because they shared common interests and values.

Safety was also a big issue we discussed with Lindsay. While college campuses work hard to ensure safety and prevent bullying, we wanted Lindsay to be able to assess risk herself. We discussed walking alone, drinking and drugs, and dealing with strangers. College is a great time to meet new people and socialize, but it is also a place where students come into many new situations and don’t know how to react—safety is important for all students to learn.

Lindsay is currently a senior at Pacific University, working on her thesis project for her German major and her writing project for her creative writing major. She is both excited and overwhelmed at the idea of graduating. While we are always here to support Lindsay and be coaches, we have also learned to step back, celebrate, and just enjoy her journey.