Summer Study '04: What Do the Phase II Scholars Do?

Phase II Scholars return to the University of Washington campus for their second Summer Study. They meet the Phase I Scholars as they participate in their first Summer Study, learn about college life and career preparation, and participate in a one-week workshop with postsecondary instructors. The following articles summarize some of the experiences of the 2004 Phase II Scholars.

As frequently as we all use computers, rarely do we realize the complex problem-solving skills necessary to create the programs. In August 2004, we touched the surface of such programming in the "Game of Life" Summer Study workshop. Instructed by Professor Richard Ladner, several undergraduate and graduate assistants, and a DO-IT Intern, Scott, we worked on separate projects for a week that demonstrated a few of the different uses for computer programming.

Scott created several "hunter and prey" and "maze" games. He had to work through the difficulties of "debugging," or finding errors in the program code, and use logic to create the appropriate behavior for the characters of his games.

Creating programs for an entirely different use, Scholars Tasha and Jamie developed maps of the University of Washington campus for blind students and visitors. They had to first simplify the visual maps through image processing and then add Braille text to the resulting images. These maps were printed on a tactile printer that has the ability to punch bumps into paper.

Jessie worked with Stephen Wolfram's A New Kind of Science as a basis for using more classical programs. Several of these resulted in complex and beautiful patterns and shapes.

The workshop revealed the wonders of computer programming as well as the frustrations. All of us experienced many instances of satisfaction, but they were all preceded by diligence and intense problem solving.

During Summer Study our group learned about the ever-changing solar system. In the "Spaced Out" workshop our instructor, Chris Laws, taught us about the planets and formation of craters by the collision with comets and asteroids.

On the second day our group learned about craters and how to use them to help determine the age of planetary surfaces. We simulated making craters by using sand and water droplets. Once we had practice with crater counting, we were able to test our skill by applying it to images and graphs of the surface of Mars.

On the third day we were taught the difference between comets and asteroids, as well as how to distinguish between a meteor, meteoroid, and meteorite. We participated in a simulation that demonstrated how asteroids and meteorites affect a planet's surface. We dropped balls of various masses from different levels and measured dimensions of the impact. We also froze hard-boiled eggs in liquid nitrogen to simulate the collision of an asteroid with a planet.

The fourth day was the most interesting of all. We simulated the creation of comets by making comet ice cream! We used the ice cream contents to represent different components of a comet. We were even able to watch it freeze using liquid nitrogen. On our last day, we learned about planet rings and prepared for our group presentation at Summer Study's closing ceremonies.

Overall we really enjoyed the experience of this workshop and found that the ever-changing solar system is very interesting. We would like to thank the DO-IT program for offering this class and our instructor for being a fun and informative teacher. 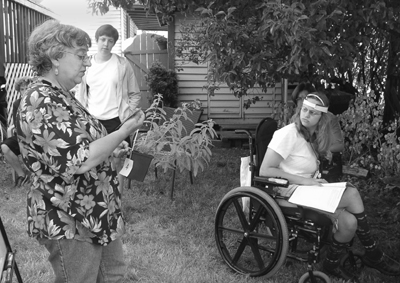 Working as a team, we five Scholars, Interns Gimmie and Andrea, our personal assistant Sam, and Suzanne Weghorst and other staff members created a virtual garden using cutting-edge technology in the UW Virtual Reality Lab. We searched online for pictures to use as models for objects to use in our garden. In order to create the garden, we first had to learn about the guidelines we needed to follow to make our virtual garden accessible to people with disabilities and the elderly. We also learned that our virtual garden should have a certain "flow," meaning that the garden should be challenging yet enjoyable at the same time.

Then we learned about the technology used to build a virtual garden. The software we used was 3D Studio Max, a program that makes computer graphics. We also used markers, which are pieces of paper that are perfect squares with an asymmetrical shape within each. Once a marker was completed, we put the Webcam over it; the computer was able to read it and create an image that appeared on the computer. Once these steps were repeated, we were able to create a virtual garden or anything else we could dream up; there are no limits. This project made us think outside the box and challenged each of us in different ways. It was made possible with the additional help of interns. We owe a special thanks to everyone who made this experience possible.

‹ DO-IT Scholars Speak for Themselves up Another Great Summer for DO-IT Interns! ›
Back to Top