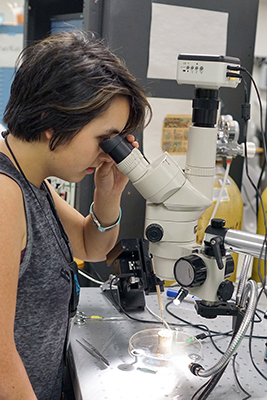 Phase 2 Scholar Naomi looks at a cockroach leg under a microscope during the neurobiology workshop at Summer Study 2017.

In the neurobiology Phase II workshop, the Scholars studied the reaction of embryonic mice hearts when drugs were used. Scholars also observed how the neurons from the cockroach leg responded when the Scholars pushed down on the leg hairs. The purposes of the experiments were to study the action potential of a neuron and how the nerves react when drugs are added to the system or when sensory nerves are activated.

During this workshop, the Scholars broke up into two groups. One group worked in the cockroach lab while the other worked in the embryonic mouse heart lab. In the cockroach lab, Scholars were able to analyze data recorded from manipulating the hairs on a cockroach leg. The cockroach legs were manipulated with a mechanical probe and viewed using a microscope. Data collected was analyzed to see how the neurons responded to touch. In the mouse heart lab, the Scholars focused on the reaction of the embryonic mouse heart when the two drugs nicotine and ACEA (Arachidonyl-2’-chloroethylamide) were applied. Scholars were able to witness how the heart reacted using a microscope and computer software.

The Phase II Scholars gained a lot of knowledge on working in a lab and conducting neurobiology experiments. Ryan enjoyed learning “more about the dissection process,” while they dissected the hearts from embryonic mice. Neurological pathways and the structure of neurons were the most important things learned by Cameron and Kyleelynn.

We would also like to thank Ron Killman for setting up the scopes, Dave Hurley and Mara Kilpatrick for helping in the biology study area, and Alex Hansen for helping with access.

‹ Summer Study: What Do Phase II Scholars Do? up Robotics Workshop ›
Back to Top