Learning About Disability from the Perspective of a 3-Year-Old 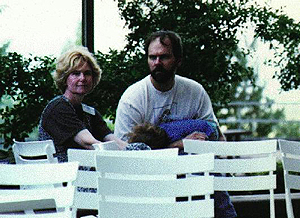 The esteemed director and her husband enjoy Sunday evening music while Travis Burgstahler takes a nap after a long day of chasing.

My son, Travis, has often joined the DO-IT Scholars for evening and weekend activities in the summer program. I decided to share the reactions of Travis, as he later recounted them, in the words that he might use to describe his experiences with the first DO-IT kids during the summer of '93 when he was three years old.

Some really big kids lived in the dorm at the University of Washington where my mommy and daddy work. I got to join the DO-IT kids after school (daycare). The first DO-IT kid I met was in a wheelchair. Mama told me his name was "Hollis." Hollis made a noise but I didn't know what he said. Mommy said he said "hi," but it didn't sound like that to me, so I didn't say "hi" back to him.

I met Mark next. He was in a wheelchair, too. He said "Hi" to me and I shouted in surprise, "Mama, Mark can talk!" I had decided that DO-IT kids in wheelchairs couldn't talk, but I guess I was wrong.

One day Hollis was talking to mommy in the computer lab, but she couldn't understand him. I listened closely and said, "mama, mama," and patted her on the leg. She was too busy listening to Hollis to hear me. I tried again. "Mama, I think Hollis is talking about hawking." Mommy realized I was right, he was telling her how to use hawking, the file server used by DO-IT. I could understand Hollis better than mommy! From then on, I felt a special bond with Hollis. He was my friend. One time mommy was talking to another adult about how Hollis has trouble speaking. "Sometimes I have trouble talking, too," I said. I didn't want anyone to think that my friend was the only one with this problem.

I met lots of other kids. Mama said they're called "teenagers" ... I want to grow up to be a teenager ... they had a lot of fun. Some had trouble talking, seeing, hearing, or walking. We took a trip to the "Ave." We had ice cream cones. Mama and I were walking with Anna. Mama told me that Anna is blind and that "blind" means she can't see. Mama carried me and I let Anna hold onto my foot. It was fun telling Anna about things that I saw.

I was really tired when we came home. I wanted mama to carry me, but she said she had too much to carry so I would have to walk. I didn't want to walk by myself so I threw myself on the sidewalk and cried. She stood over me and said "You have to walk. You're a big boy." I was tired of listening to her demands so I said, "My ears don't work." Mama didn't believe I was deaf and made me walk to the house. Oh well, it was worth a try! It seems to work for Lloyd...

I miss the DO-IT kids. Whenever we drive by the dorm I ask to go in and see them. But, mommy says that the DO-IT kids went home to their mommies and daddies until next summer. But, I am learning how to send electronic mail. I sent a message to the whole group. It said "HI, TRAVIS." followed by some rows of numbers (I knew they would want to see some of the numbers that I am learning about.) I sent the message and it went zoom, zoom out the window to all of the DO-IT kids' computers.

What can a three-year-old teach an adult?

A three-year-old is in the process of trying to put some order in his world. At a younger age, Travis learned to put things in broad categories...birds, dogs, people. At three, he is learning to make finer distinctions...what we do on Saturday versus what we do on Sunday; what clothes boys wear vs. what clothes girls wear; the difference between a Mazda RX7 and a Honda. He's into the details that distinguish things within a group. So, he approached students in the DO-IT program like this.

He applied his newfound knowledge and noticed, "All the kids in my school can walk, but some people can't. They have to ride in wheelchairs." At another time, "When people can't see, you have to help them find things sometimes." He zeroes in on the functional implications of a specific disability. Why do we, as adults, so often generalize disability to the whole person, saying "She is blind" as if she lives in a totally different world? I don't know. Perhaps we should ask the three-year-olds of this world to help us.

‹ Impressions up College Tips: How to Write a University Entrance Essay, by Example ›
Back to Top