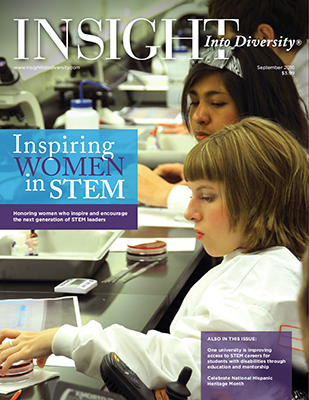 The article reported that according to the U.S. Bureau of Labor Statistics, opportunities in science, technology, engineering, and mathematics (STEM) are projected to create more than nine million new jobs by 2022. It also shared data from the National Science Foundation that reveals that scientists and engineers with disabilities are more likely to be unemployed compared to their peers without disabilities.

DO-IT’s AccessSTEM Careers project is described in the article as a “prime example of a longstanding program with a mission to diversity STEM fields by preparing students with disabilities for postsecondary studies and the workforce.” Indeed, AccessSTEM provides mentoring, tutor support, career development, and leadership opportunities to students with disabilities interested in STEM fields. Funding comes from the National Science Foundation and the Mitsubishi Electric America Foundation.

As DO-IT Director Sheryl Burgstahler suggests: “It’s important to think about diversity within the classroom. Many people just think about the average student.” Sheryl’s comments highlight a growing awareness that it’s important to view disability as a diversity issue—much the same as embracing racial minorities, women, and other groups underrepresented in STEM fields.

According to their website, “Insight Into Diversity is the oldest and largest diversity magazine and website in higher education.” The 40-year-old magazine reportedly reaches hundreds of thousands of readers per issue.

The article can be viewed here. An accessible PDF can be requested from doit@uw.edu.

‹ Director's Digressions: Leadership of State IT Accessibility Policy Implementation at the UW up AccessEngineering Panel at the Society of Women Engineers Conference ›
Back to Top