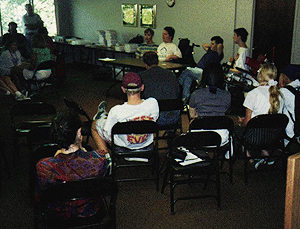 DO-IT Scholars discuss the creation of the DO-IT Gopher Server.

In the Information Systems class, we primarily learned how to set up a gopher system--namely the hawking one--and the basic UNIX commands for creating the files that go into it. Since the gopher software's creation out of the University of Minnesota a few years ago, many institutions--governmental, educational, and even commercial--have elected to set up a gopher as a way to efficiently and easily organize and distribute pertinent information related to their function as an organization. For instance, a company could decide to put their application for employment up on their gopher server.

The DO-IT program, like most with gopher sites, has available via its gopher a wide range of resources. Everything from what's been published about the program in the media to information on how to become a Scholar or Mentor to interesting science related resources. One interesting concept that we learned was that a gopher site is always in a state of evolution--it's impossible to have a completed gopher. Two reasons account for this. First of all, a gopher server is a "living database" of information, which means that files put up are constantly going out of date, being revised, added too, and things that are no longer relevant are being dumped. Sometimes a matter of taste dictates the gopher structure be reworked.

The second reason for the ever changing gopher has to do with links. There are a number of problems with maintaining vast resources of information. It would be inefficient, time-consuming, labor-intensive, and ultimately a waste of time to have many resources on many different topics on one gopher server. Also, the administrators of a particular site may want to provide information not directly pertaining to the function of their organization. So as an alternative to lots of heavy work, gophers contain links, or passageways, to other gophers.

For instance, in gopher, you can select a menu item which will transparently move you to an entirely separate gopher from the one you originally entered the address for at your system prompt. You could conceivably go through a limitless number of gophers in this manner in your search for interesting tidbits of knowledge. Gopher systems are constantly being created and decommissioned, and so when one goes down all the links to it on any other gophers cease to work.

The week-long class briefly went over some of the aesthetic issues of setting up a gopher, as well as some DO-IT specific considerations. We toyed with ways for making it screen reader friendly for blind users, making the structure of the files somewhat intuitive, and generally making sure things made sense. Overall, we think the class made valuable contributions to our understanding of the processes of the Internet, as well as giving us the knowledge to do things from our own Internet node.

‹ World of Radio, an Option for the Visually Impaired up Off the Net ›
Back to Top