Increasing numbers of students with disabilities are participating in college and university courses. However, as a group, they experience far less academic and career success than their nondisabled peers (National Center for Education Statistics, 2008; National Council on Disability and Social Security Administration, 2000; National Science Foundation, 2012).

A small but growing body of research suggests the efficacy of universal design of instruction (UDI) as a collection of instructional strategies that support the success of students with diverse characteristics. UDI practices include making expectations clear, employing multiple methods to deliver instruction, offering outlines and other scaffolding devices to support learning, and using multiple types of assessments (Burgstahler, 2015). A few studies have examined the effects of UDI for both faculty and students. Langley-Turnbaugh, et al. (2013) found positive outcomes among faculty receiving UD training to improve their teaching, Smith (2012) has reported a positive relationship between student interest and engagement and the application of UDI practices, and others have reported benefits of the practices as perceived by students (Kumar & Wideman, 2014; Zhong, 2012).

Reports of research studies that compare overall student outcomes of the same course taught with and without the application of UD are beginning to appear in the literature. For example, Beckman (2009) offered two versions of a graduate course in information management, teaching one “traditional” section using lectures as the primary instructional method and one “treatment” section supplementing the lectures with small group discussions. Though the groups performed similarly on multiple-choice and fill-in-the-blank exam questions, suggesting comparable mastery of factual material in the two sections, students in the treatment group performed better on essay exam questions, suggesting an enhanced ability to use the information, and these students more frequently reported that “the instructor was open to a variety of points of view.” However, this study did not compare the relative benefit of UD practices for students with disabilities as compared to those without disabilities. The purpose of the current study is to test the hypothesis that UD teaching techniques can support students with disabilities in earning better grades, making them closer to those of their nondisabled classmates.

Three projects over a period of 10 years were hosted by the DO-IT (Disabilities, Opportunities, Internetworking, and Technology) Center at the University of Washington and funded by the U.S. Department of Education under the Office of Postsecondary Education (Grant #P333A050064, P333A990042 and P333A020044). These projects, collectively referred to as the AccessCollege initiative, engaged a leadership team of faculty and administrators representing a diverse set of 2- and 4-year postsecondary institutions from more than 30 states (DO-IT, 2012). One project objective was to increase the knowledge and skills of faculty in a variety of disciplines to strengthen their ability to fully include students with disabilities in their courses. Activities undertaken to meet this objective included development of the following resources:

As AccessCollege activities unfolded, faculty requested examples for the application of UDI to specific instructional products (e.g., textbooks, videos, websites) and environments (e.g., classrooms, computer labs, online learning). In response to these requests, DO-IT, with input and vetting from project partners, operationalized UDI into a checklist of promising practices that demonstrate how UD can be applied to the overall design of instruction and specific aspects of the learning environments. In addition, this material assists with the determination of accommodations when universally designed instruction does not fully address the needs of a specific student with a disability, such as when a student needs a sign language interpreter or extra time on tests. The publication that listed UDI practices was distributed in most professional development offered to faculty as part of the AccessCollege project (Burgstahler, 2015).

The third AccessCollege project focused on outcomes and impact of faculty training. It included the delivery of 184 professional development presentations and workshops to more than 2,210 faculty and 126 teaching assistants on campuses and at professional conferences nationwide. Researchers in the project sought an answer to the question: Does the application of UDI practices result in leveling the academic playing field for students with disabilities? This question was operationalized into the following research question: Does applying UDI techniques in a class result in reducing the gap between the grades of students with disabilities and those without?

Instructors at six Washington State colleges volunteered to receive UD training and participate in this study. Training was provided by an AccessCollege Team member who was hired to train faculty on multiple campuses on UDI methods. She also worked with the project evaluator to collect grade data for students in these instructors’ classes and in the classes of their “matched” colleagues as described below. The training, which ranged from 1–3 hours in length, took place at a variety of community and technical colleges. Faculty who engaged in the training did so voluntarily once the training option was announced. The presentations included a description of UD and of UDI, examples of UDI strategies, a video demonstrating UDI strategies, and further resources on the Universal Design in Education website. Each presentation was followed by a discussion.

A subset of this dataset was used for the analysis. Only classes with grades available for at least one student with a documented disability were included in this analysis and, of these, only those with data collected from classes taught both before and after the faculty training period. Of these, the only classes included in the study had at least one matched comparison instructor whose classes also met these data requirements. After the application of these restrictions, 126 classes remained, yielding 264 grades for students with disabilities and 3,066 grades for students without documented disabilities. Forty-three of these classes were taught by faculty who received training (16 of the classes were taught prior to the training; 27 after), and 83 of the classes were taught by matched comparison instructors (30 of them prior to their faculty match’s training, and 53 after).

The research question—Does applying UDI techniques in a class result in reducing the gap between the grades of students with disabilities and those without?—was investigated using a quasi-experimental 2X2X2 research design. The three factors in the design were student disability status (students with vs. students without a disability); faculty group (trained faculty vs. “matched” faculty without training); and timing (before and after the training period). The dependent variable was average course grade. 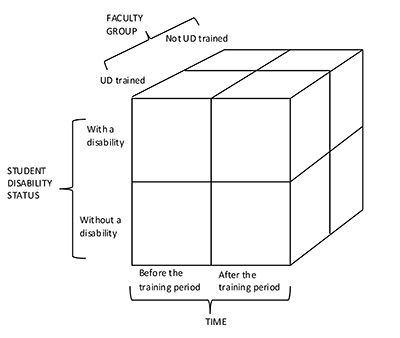 The reason the researchers gathered pre and post data for the comparison instructors when they received no intervention between the two periods was to ensure that any changes found in the GPAs of students in the UD-trained classes were not due to some campus-wide or community level phenomenon. Thus, the average GPA of students with disabilities and the average GPA of students without disabilities were computed and recorded for each course, before the training period (left half of the cube) and after the training period (right half of the cube).

For analysis, the patterns of change in average GPA of students with vs. without disabilities from pre- to post-training were compared to determine whether the grade gap between students with and without disabilities decreased after the training. These GPA changes were compared with those in the classes of comparison instructors who did not receive training but taught similar courses to ensure that any changes found could not be explained by some campus- or community-wide change during that time period.

Figure 3. Students in Untrained Faculty Courses: Change in Average GPA for SWD and SWOD From Pre- to Post-Training Period

A weakness of a study like this is that it was conducted in courses that do not include enough students with a wide range of disabilities to analyze an intervention’s success with specific sub-groups. Also, although the results indicate an apparent effect of the intervention, no assessment was made to determine which UD practices, if any, the trained instructors employed nor the value of specific UDI strategies. More and larger research studies are needed to further explore these issues.

UDI is often promoted as a means for leveling the playing field for students with disabilities in higher education. However, research reported in the literature rarely addresses the question of whether employing UDI practices brings the performance of students with disabilities closer to that of other students. Data collected in this study suggests that professional development and resources offered to faculty as part of the AccessCollege initiative increased their ability to level the academic playing field, resulting in decreasing the gap between the earned grades of students with and without disabilities.

Smith, F. G. (2012). Analyzing a college course that adheres to the universal design for learning (UDL) framework. Journal of the Scholarship of Teaching and Learning, 12(3), 31–61.

This article is part of the collection Universal Design in Higher Education: Promising Practices, sponsored by the DO-IT Center. The report was written with the support of funding from the National Science Foundation under Grant #HRD-0929006. Any opinions, findings, and conclusions or recommendations expressed are those of the author(s) and do not necessarily reflect the views of funding sources or the DO-IT Center.
Copyright © 2015 University of Washington. Permission is granted to copy and distribute these materials for educational, noncommercial purposes provided the source is acknowledged.