How Ableism Affects People with Disabilities 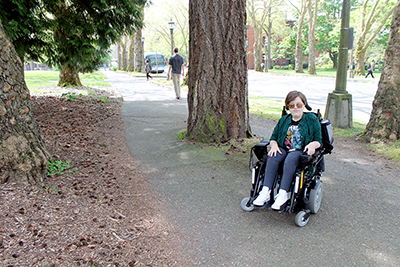 Ableism is a form of discrimination against people with disabilities, being seen as lesser or having their access controlled based on their abilities. In 2015, then presidential candidate Donald Trump mocked a reporter with a disability at a rally by pretending to suffer from muscle spasms. Ableism is still prominent in society. DO-IT Ambassadors and Scholars were eager to share their experiences in this regard.

“I have experienced ableism on the UW campus because of all the stairs,” said Lindsey, who uses a power chair. She also said the sidewalks are in bad shape, making traveling take longer and planning how to get around campus a challenge.

Lindsey and Vanessa, a fellow wheelchair user, also have had negative experiences with societal expectations. Waiters in restaurants have asked their parents or friends what they want. “I have experienced ableism because of the way people look at me. They look at me like a baby when I’m an adult,” said Vanessa.

Izzy has dyslexia, a learning disability that makes it hard to read, write, and spell. “In 3rd grade I asked this kid how to spell a word,” Izzy said, “and he wouldn’t spell it for me. He called me an idiot.” This can be a common misconception, as disabilities like attention deficit hyperactivity disorder, dyslexia, and dysgraphia can be confused with general ignorance.

Cheyann, who is blind, uses a cane and often asks people for directions. “People see me as fragile,” she said. “I was walking in the pool and my hands were out to protect me. A man ran out, screaming at me, trying to grab my hands,” she described an experience that stood out to her. “It just annoyed me that people assume I’m doing something wrong.”

The more we refuse to recognize the potential of disabled people, the more everyday people become ignorant of reality. Change starts with everyone working together. Ableism is defeated by actually talking to people with disabilities and realizing they are people first.