Muscular dystrophy may mean Bratcher uses a wheelchair and other adaptive equipment, but it won't stop him from pursuing a college degree in engineering or business.

Bratcher was one of 21 students in the Disabilities, Opportunities, Internetworking, and Technology (DO-IT) Scholars program who visited Microsoft's Redmond campus Aug. 6. During the visit, the students heard from employees and interns with disabilities about their work experiences.

DO-IT Scholars are high school students with disabilities who plan to attend college and pursue careers in such fields as science, mathematics, engineering, and technology. 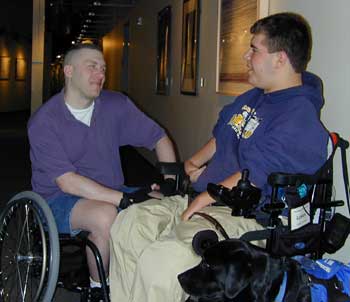 Microsoft developer John Wiederhirn (left) talks to Lukas Bratcher, a 16-year-old from Spokane, Wash., who visited the Redmond campus as part of his participation in the Disabilities, Opportunities, Internetworking, and Technology (DO-IT) Scholars program.

Said Wiederhirn: "Microsoft is willing to see me for what I can do. There's no question that this is the place for me."

As part of the DO-IT Scholar program, students attend a two-week Summer Study Program on the University of Washington campus in Seattle. They then stay in touch with one another and DO-IT mentors year-round via the Internet. As they move on to college and employment, DO-IT Scholars transition into DO-IT Ambassadors, sharing their experiences with younger Scholars.

"A lot of kids with disabilities have been told they can't do things-they can't go into extensive sciences," Bratcher said during his Microsoft visit. "Some of the people here are actually a year or two ahead in their math and science classes."

Despite inaccessible facilities, curriculum materials, electronic resources, and other barriers, students with disabilities are succeeding in post-secondary education and going on to challenging careers.

DO-IT contributes to that success with a variety of programs that not only help those students prepare for college academically, but also support their teachers, professors, librarians, parents, and mentors.

"Being here shows them they can work wherever they want," Tidwell said. Bratcher, who attends mainstream classes at Mead High School in Spokane, said the DO-IT Scholars program gives him a chance to interact with other kids who have disabilities.

"They understand everything. They see the other half-things other people don't see," Bratcher said. "They've been told they can't do things, and they're proving everybody wrong."

Employees and interns with disabilities who spoke to the DO-IT Scholars agreed the work environment at Microsoft makes their disabilities a non-issue. Alexandra MacKenzie, a 2004 graduate of Kentwood High School in Covington, Wash., who will attend the University of Washington, told the students that few of her coworkers on the Windows XP Embedded team know she is visually impaired.

"They're more interested in whether you can do your job," MacKenzie said.

John Wiederhirn, a software-design engineer working on the Next Generation Secure Computing Base, said that among companies in the high-tech industry, Microsoft stands out as an attractive employer for people with disabilities.

Wiederhirn, who lost most use of his legs after a spinal-cord injury in 2000, recalled the extensive ergonomic evaluation he went through when moving into his office.

The ergonomic specialists offered a multitude of ideas for improvements, and though they ended up simply clearing the area under Wiederhirn's desk so he could move his wheelchair about freely, it became the first of many examples of the company's willingness to accommodate his disability.

"Microsoft is willing to see me for what I can do," Wiederhirn said."There's no question that this is the place for me."

Scott Ferguson, who in three years has gone from DO-IT Scholar to DO-IT intern, said the program has taught him self-advocacy skills that help him succeed in classes at Cascadia Community College in Bothell, Wash.

In addition to studying introductory programming, Ferguson also has taken two classes in political science, which he said is a challenge for someone with autism spectrum. He currently is contemplating more involvement in politics, perhaps even working on a campaign.

DO-IT has taken Ferguson beyond the comfort zone of his daily life with his family and teachers, challenging him to sink or swim.