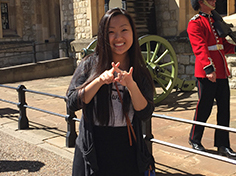 Hello, my name is Grace, and I am a second year student majoring in mechanical engineering at Rochester Institute of Technology (RIT) in New York. Throughout high school, I was unsure of what I wanted to do in the future. I discovered my passion in math and science my freshman year of high school and joined programs that allowed me to learn more about computing and other science fields. However, I still wasn’t sure what I wanted to major in when I started college. I knew I was interested in going into a field in science, technology, engineering or mathematics (STEM).  Through some research, I was able to narrow down my interest to general engineering. General engineering involves both math and science.

My dad is an industrial engineer at Boeing. During my senior year of high school, he signed me up to job shadow at Boeing. During the job shadow, I was able to learn about what a typical day looks like for different types of engineers. I saw workers assembling smaller pieces that would eventually be put together to create a plane. Being exposed to behind-the-scenes brainstorming, discussions, and designing and drafting projects with engineers, I knew this was the field for me.

I chose to attend RIT, since they have a great engineering college, as well as the National Technical Institute for the Deaf, which provides a strong support system and services for students who are deaf or hard of hearing. After my first semester of college, I declared a major in mechanical engineering. Now halfway through my second year, I have loved all the engineering courses I’ve taken so far.

At school I use a sign language interpreter and also have a note taker for each of my classes. One class I had this year was a project-based class. The final project required teams to make a device that played music. That was really hard for me because it was sound-based. I couldn't contribute as much as I wanted to, and it was hard to be a part of the team. At the end of class I spoke with the professor and suggested that in the future, he use lights that flash in addition to chimes to make the project more accessible for deaf and hard of hearing students. Despite that experience, I’m enjoying my studies overall.

RIT requires engineering majors to participate in co-ops or internships before graduating. I hope to land internships at SpaceX, Lockheed Martin, or UTC Aerospace Systems. In the distant future, I would love to design technology that would benefit the Deaf community and make their lives more accessible.