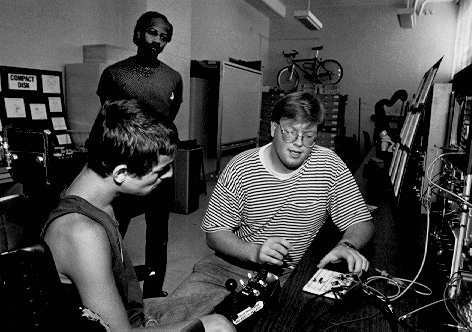 Hollis Listens carefully as the professor explains some details behind the workings of an electronic component.

As you might have guessed, Consumer Electronics deals with anything that is electrical and is a luxury. For example, we took a look at compact discs--the inside, outside, and everything that can be done to a compact disc. We worked with a laser and were able to write music on a computer.

We opened the lecture with a brief introduction to the world of CDs. Presentation was easily understood and helped us understand what we would be doing later in the day. We started off by going back to the basics and looked at some CDs with scratches, grasping the concept of how a compact disc can correct itself. We understood how a CD player functions, reads information, and plays.

One of the high points of the day was getting to compose our own song. Most people didn't know how to compose music because they were never able to write music on a piece of paper let alone on a computer. So this was a real eye opener for most people because it showed them that they can write music even though they may not be able to write on paper. We know that people really enjoyed this day and next summer hopefully we can have it again.

‹ Predator and Prey up Mentors ›
Back to Top